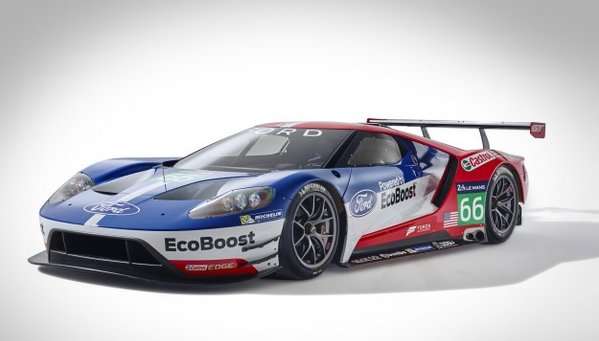 The 2015 24 Hours of LeMans race starts tomorrow and today, Ford Motor Company announced their plans to return to LeMans in the 2016 race with the new Ford GT race car – which looks a great deal like the Ford GT street car with some extra aero bits and a flashy paint scheme completing the package.
Advertisement

Since before the Ford GT road car was introduced at the 2015 Detroit Auto Show back in February, there had been a rumor going around the automotive world that Ford Motor Company was looking to make a return to LeMans. The Ford EcoBoost Prototype has done a fine job of putting the Blue Oval atop the American endurance racing world, but the rumors insisted that there was a new production-based Ford race car coming to LeMans.

Today, all of those rumors proved to be true, as Ford Motor Company has introduced their new Ford GT endurance race car, which will compete in both European and American events with a goal of competing in the 2016 24 Hours of LeMans race.

The Ford GT road car looks like a race car, until you see the new GT endurance race car. Of course, the race car will also have an interior that is devoid of any creature comforts, cutting down to only what is needed while also making room for all of the necessary safety bits.

Finally, the new Ford GT race car will be powered by a similar 3.5L EcoBoost engine to what is used in the current Ford EcoBoost Prototype race cars that have done a fair share of winning over the past two years. The Ford GT road car is said to have a version of that race engine which has been modified for street use and when that engine is shifted over to the production based LeMans GTE Pro class, it will likely be adjusted for rules of that class. In other words, the Ford GT race car won’t have the exact same engine as the current prototype cars – but it should be similar.

Goal = LeMans 2016
The new Ford GT race car will compete in a variety of events both in Europe and the USA, with emphasis on the FIA World Endurance Championship and the TUDOR United SportsCar Championship with two two-car teams. The key goal for the team will be a LeMans entry in 2016, as the Ford GT dominated LeMans back in 1966. Ford’s hope is that the modern GT race car will celebrate the 50th anniversary of that dominating win with a LeMans win in 2016.

In the meantime, check out the video of the new Ford GT race car below!