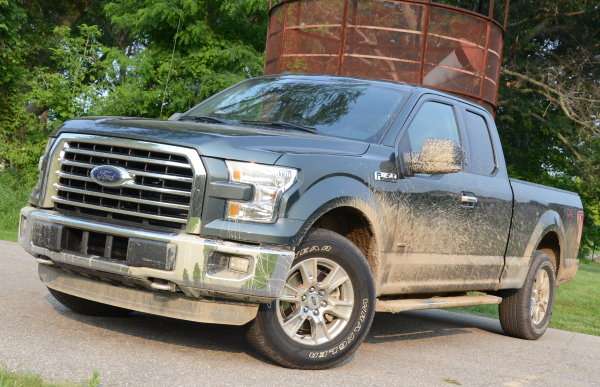 Ford’s Mark Fields commented a while back that the Motor Company will have a hybrid F150 by the end of the decade and while that makes sense, both General Motors and Chrysler have tried unsuccessfully to launch large hybrid trucks or SUVs – so can Ford really make a similar truck work by 2020? I think so.
Advertisement

First off, for those who haven’t heard, Ford CEO Mark Fields stated a few weeks back that the company plans to offer a rear wheel drive, convention hybrid version of the F-series pickup by the end of the decade. That was the extent of the information, but that was really all that he had to say. As we enter the 2016 calendar year, the end of the decade is only 4 years away, so within the next couple of years, we should be seeing some kind of hybrid Ford pickup.

When this news surfaced, it was a big deal in the truck industry, as it has long been speculated as to how the bestselling vehicle in the US would continue to upward climb in fuel economy numbers. Recently, spy shots captured what many believe to be an F150 powered by a small diesel V6, but Fields’ comments seemingly prove that Ford will go the hybrid route. Of course, the arrival of an F150 hybrid doesn’t mean that there will not be an F150 diesel, but this is the first real proof of a hybrid while the diesel remains all speculation.

Another Hybrid Full Size?
If you have paid much attention to the truck and SUV segments over the past two decades, you will remember that both General Motors and Chrysler have offered up large hybrid trucks and SUVs. General Motors has dabbled in both large trucks and large SUVs with a V8 gasoline-electric hybrid drivetrain and while Chrysler has only offered the hybrid Hemi Ram to some small fleets around the country, the 2nd generation Dodge Durango packed hybrid Hemi power.

The key criticism with all of these large hybrid vehicles from both GM and Chrysler is that the fuel savings gained from adding the hybrid technology don’t offset the added cost of the hybrid technology. In the case of smaller hybrid vehicles, hybrid packages are often significantly more fuel friendly than the non-hybrid versions, but in the case of these large trucks and SUVs, they only pick up a couple MPGs with the electric assist system.

The hybrid Chevy Silverado and Dodge Durango weren’t bad vehicles, but they failed to make a splash in their respective segments because the fuel economy just wasn’t all that impressive when you consider the cost of the package. However, I believe that Ford Motor Company stands a much better chance of building a hybrid F150 that can get the kind of MPG jump that you would expect from a proper gas-electric drivetrain.

Ford is a Hybrid Leader
While I mean no disrespect to the hybrid programs of General Motors or Chrysler, it is hard to question Ford as the American leader in hybrid technology. When you remove the Chevy Volt – which is an electric drivetrain with a gasoline range-extending engine – General Motors hybrid efforts in cars like the Buick Regal and the Chevy Malibu fail to compete with the likes of the Ford Fusion or Ford Escape in hybrid trim. Next to Toyota, Ford sells more hybrid technology than anyone in the US market and when you add in a few more years of technology advancements, the F150 Hybrid could have the best chance to succeeding in offering real hybrid fuel economy from a full size pickup.

We should also mention that with the heavy use of high strength steel and the lightweight aluminum body, the F150 is one of the lightest half ton trucks on the market, so when coupled with the in-house hybrid technology – I believe that the F150 Hybrid has the best chance of making a big impact on the half ton truck world.