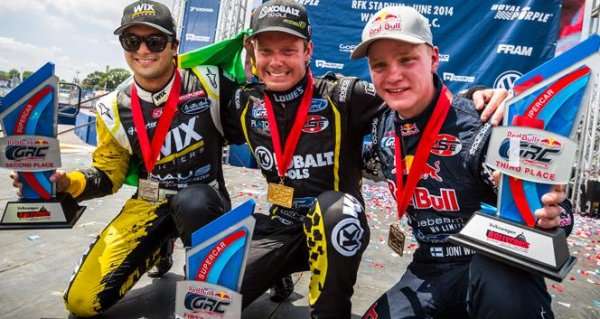 This past weekend marked the third event of the 2015 Red Bull Global RallyCross event with the Volkswagen Rallycross DC and for the first time this season, Scott Speed and his VW failed to take the win as Ford Fiesta racers claimed each of the top four spots after both VW teams ran into engine problems.
Advertisement

After Scott Speed and his 7Up Volkswagen Polo RallyCross car won each of the first two events of the 2014 Red Bull Global RallyCross season, Speed and teammate Tanner Foust were the ones to watch at the Volkswagen Rallycross DC this past weekend in Washington DC. 12 drivers arrived in the nation’s capital to battle for the win in this third GRC event of 2014 and as has been the case in the previous races this season, the racing action was hot and heavy – but it didn’t end with Scott Speed dominating the field.

Early Problems for Volkswagen
Although Foust and Speed arrived in DC as the early favorites after Speed and his VW dominated the first two events, engine problems for both of the Volkswagen teams kept them out of the first heat races of the weekend on Saturday. Things were a bit better for the VWs in the semifinal heats on Sunday, as Speed finished second to Nelson Piquet Jr in the first semi with Joni Wiman and Ken Block also advancing to the finals. Block had originally not qualified for the finals, but an error in a penalty to Wiman led the GRC officials to give Block a pass into the finals. In the second semifinal heat, Steve Arpin beat Patrik Sandell and Sverre Isachsen as those three advanced to the finals. Tanner Foust won the Last Chance Qualifier to get his spot in the finals along with Austin Dyne, Bucky Lasek and Rhys Millen. Emma Gilmour was the only driver at the event who did not participate in the finals after Block got the official pass to run for the win.

“This was an unbelievable weekend for the team. We had two cars that had random engine issues within an hour of each other—one had a bolt back out into the flywheel, and the other one had a bearing go bad—and we had one spare engine. So we changed both engines, but they also had to manufacture a bearing out of a piece of a hammer, organize some CNC work, and rebuild a gearbox. It’s unbelievable that they put it all back together,” said Tanner Foust. “They were here until 2:30, and we didn’t think we were going to be on the track today. Instead, we were able to get there in the final and have potential for a good result. We were still suffering some engine problems in the final, so we couldn’t really hold on to third place, but I’m still unbelievably proud and amazed by the capabilities of this team.

Ford Spends the Finals Battling for the Lead
Although an early jump by Sverre Isachsen made for a slightly messier than usual race, the fact that Sverre quickly stopped his car as a self imposed penalty prevented the field from having to go through the headache of a restart and without having to send Isachsen to the penalty box. Through the hectic start, Nelson Piquet Jr got the lead with a great launch, but Patrik Sandell took the lead back during the first lap. This set up a battle for the lead that would go on throughout the entire final race between the two Ford Fiesta rally cars while Tanner Foust sat in third.

Unfortunately for Foust and the VW camp, Tanner’s Polo ran into more engine problems and that forced him to drop to 5th behind both Wiman and Steve Arpin and just ahead of teammate Scott Speed in 6th. Through what turned out to be a very clean, caution free race, Sandell held on for his first Global RallyCross win with Nelson Piquet Jr in second, Joni Wiman in third, Steve Arpin in fourth, Foust in fifth and Speed in sixth. Ford Fiesta race cars driven by Ken Block and Austin Dyne finished seventh and eighth respectively while Rhys Millen’s Hyundai and the two Subarus driven by Sverre Isachsen and Bucky Lasek rounded out the finals field.

“It’s absolutely perfect. I felt when we came here that if I could just be smart and not make any mistakes, I could fight for the top. And I knew that the start at the final was so important, so I just tried to focus on that as much as I could,” said Patrik Sandell, Driver, #18 Olsbergs MSE Ford Fiesta ST. “ I think I took the start directly on the light, and that made me come off the line so good. That was the key to everything.”

Speed Maintains the Championship Lead
Even though Scott Speed had his worst weekend of the 2014 Red Bull Global RallyCross season and one of the worst of his short GRC career, he managed to hang on to the lead in the run for the championship after the first three events. Speed leads Nelson Piquet Jr by just one point while Patrik Sandell and Steve Arpin are tied for 3rd, 27 points back of Speed.

The next event of the 2014 Red Bull Global RallyCross season is on July 20th with the second Volkswagen RallyCross event in New York.