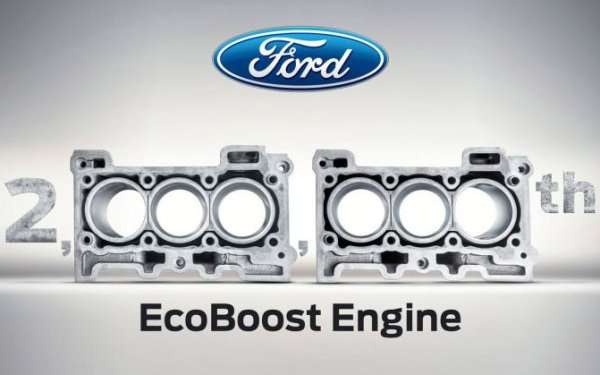 Ford Motor Company has announced that yesterday afternoon, the 2,000,000th EcoBoost engine was produced and loaded into a new Ford product – in this case a new Ford Escape packing the top of the line 2.0L 4-cylinder EcoBoost mill.
Advertisement

Ford Motor Company introduced the EcoBoost technology in 2009 with the 3.5L EcoBoost V6 in the likes of the Ford Taurus SHO and the Ford Flex but since then, the EcoBoost lineup has expanded substantially with a pair of 4-cylinder options in the US market including the 1.6L and 2.0L mills that are offered in the Edge, Fusion and Escape while other markets are currently ale to opt for a 1.0L 3-cylinder EcoBoost or a 1.5L 4-cylinder EcoBoost. In addition to new EcoBoost engines, the “original” 3.5L EcoBoost V6 has been offered in more vehicles like the Ford F150 and the Ford Explorer Sport – with buyers quickly falling in love with the half ton F Series pickup powered by the 3.5L EcoBoost that makes it the most powerful option in the F150 lineup.

"Ford EcoBoost delivers great performance with lower fuel bills, a recipe that is proving incredibly popular with consumers around the world," said Joe Bakaj, vice president, powertrain engineering for Ford. "EcoBoost engines are attracting new customers to the Ford brand every day, and our plants are working hard to keep up with demand."

The result of this expansion is vastly more EcoBoost vehicles being sold each month and that growth in production has allowed Ford to build 2,000,000 engines sporting this fuel efficient turbocharging technology in just 4 years. The vehicle to pack the 2,000,000th EcoBoost engine was a top of the line Ford Escape with the 2.0L EcoBoost 4-cylinder that rolled off of the assembly line in Louisville Kentucky.

Ford’s EcoBoost has become so popular due to its fine mix of power and fuel efficiency with the 3.5L EcoBoost V6 offering V8 power with V6 fuel economy while the smaller 4-cylinder engines provide incredible efficiency but they do so while also being among the most powerful small engines on the market today.

After a slow start to EcoBoost engine production back in 2009, the company is now building over 100,000 EcoBoost engines each month at facilities around the world with an annual target for 2013 of 1.2 million engines built this year alone. That is an increase of 60% over 2012 and for the first time since being introduced, the EcoBoost gasoline engines could exceed production of Ford’s diesel engines. While the EcoBoost engines are available in a variety of vehicles around the world, the Escape (and Kuga in some non-American markets) has become the key vehicle for Ford Motor Company in terms of EcoBoost take rates.

To brace for this added demand, Ford has doubled production of the 1.0L EcoBoost engine at their Cologne Germany plant while also planning investments of $200 million here in the US to build the popular new 2.0L EcoBoost that serves as the premium engine choice for the Fusion and Escape.

Finally, Ford plans to continue offering more EcoBoost options on more models so by 2015, 95% of American-sold Ford products will be offered with at least one form of the EcoBoost engine.