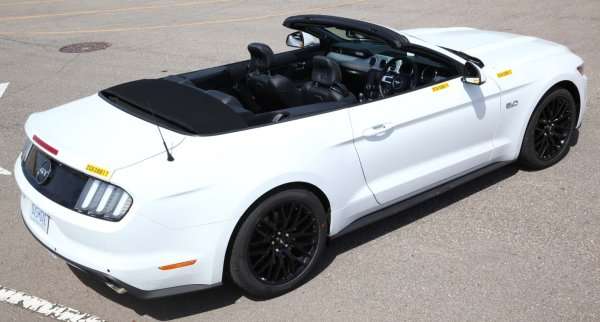 The Ford Mustang is so popular in Australia that the American muscle car is technically sold out until the middle of 2017, but the Motor Company is trying to help shorten the waiting list by allocating an extra 2,000 units for the Aussie market – although those extra cars won’t arrive until late this year.
Advertisement

Before the Ford Mustang with the first ever factory right hand drive configuration hit the Australian market, there was some speculation as to whether the market would display that much interest in the American muscle car. Ford was pretty sure that the performance crowd in Australia would be excited to get the Mustang and it turns out that they were very right. The Mustang has basically had a waiting list since the first day that it went on sale and with reports stating that more than 6,000 Aussie’s have preordered the new muscle car, the car is effectively sold out until the middle of 2017.

Fortunately, the wait for the new Ford Mustang should be getting a little shorter, as the company will send an extra 2,000 examples to Australia later this year as part of the 2017 model year. These extra 2,000 units won’t satisfy the demand right away, but it should knock out another big chunk of preorders.

Every Ford Mustang sold in the world is built at the Flat Rock Assembly Plant near Detroit, Michigan. When the newest generation of the Mustang began rolling off of the line, the key concern was to supply the local (North American) market. Once the US and Canada were taken care of, the Flat Rock plant began building the right hand drive models for export, along with sending left-drive models to foreign markets around the world.

When Ford sends cars to a foreign market, they go into that market with a plan to supply a certain number of vehicles during the course of the year. Ford will literally build and sell as many Mustangs for the US as they can, but for markets like Australia or China, the company decides in advance how many units they will send there based on forecasted sales. Mustang sales have far exceeded the forecasted demand, which has caused a huge backlog in orders and with 6,000 preorders, Australian dealerships have taken more orders for Mustangs than they will receive this year.

2017 Model Year Changes
In addition to a larger allocation than originally planned, the 2017 Ford Mustang gets the new SYNC 3 infotainment system, the EcoBoost Mustangs get a full size spare tire and those buyers who “end up” with a 2017 Mustang rather than a 2016 model can pick from three new colors – Lightning Blue, Grabber Blue and White Platinum Tri-Coat. Guard, Competition Orange and Deep Impact Blue will no longer be available once the 2017 models arrive sometime later this year.

Best of all, there is no price increase planned for the 2017 Ford Mustang, so those folks who have to wait for the 2017 model will not pay more, but they will get the improved infotainment system and a few new exterior paint options.