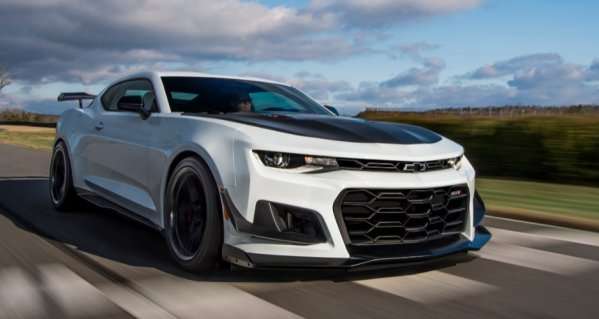 The first new Chevrolet Camaro ZL1 1LE built for public sale will be sold to the highest bidder at this weekend’s Barrett Jackson Palm Beach Auction, with the proceeds going to the United Way – a figure which will likely climb well into the six-figure range.
Advertisement

The 2017 Chevrolet Camaro ZL1 1LE is marketed as the most track-capable muscle car ever to ever roll off of a GM assembly line. The 650 horsepower LT4 V8 makes the Camaro ZL1 a beast on the dragstrip while the extreme aero kit of the 1LE package works in conjunction with the magnetic suspension system and the high performance brakes to make this car just as much of a beast on a road course.

These credentials will surely make the Camaro ZL1 1LE a big hit with racers, but there is no question that this wild- looking Camaro will also become a popular item with collectors. You know, the crowd of people who will buy the car to tuck it away or they might drive to car shows, keeping it away from the track in order to preserve the value for years to come. For collectors like that, getting the first unit of a car like the new Camaro ZL1 1LE is an attractive idea, so as has been the case in the past, General Motors will auction off the first example of this new high performance machine for charity.

Camaro ZL1 1LE #1
The first ever Chevrolet Camaro ZL1 1LE will be auctioned off at the Barrett Jackson Auto Auction in Palm Beach, Florida this coming Friday. The car which actually rolls across the high profile auction block will likely be a preproduction model, allowing the winning bidder to pick the color before the car is built in delivered. Of course, the winner will also get the supercharged LT4 V8 mated to a 6-speed manual transmission, the Magnetic Ride Control suspension system, the Brembo high performance brakes, a loaded interior and the extreme aero bits of the 1LE package – adding a huge rear wing, a larger front splitter, dive planes, and enlarged air intake vents, along with lightweight wheels wrapped in high performance tires.

As mentioned above, the Chevrolet Camaro ZL1 1LE will likely prove to be the quickest factory production Camaro from GM on straight tracks and twisty tracks – while unit #1 will be an instant collectable.

The good news is that Camaro ZL1 1LE is up for grabs at this weekend Barrett Jackson Palm Beach auction, but that is also kind of the bad news, too. GM has auctioned off a great many #1 vehicles for charity over the past few years and in every case, they have brought big money. Some of the cars have gone for as much as a million dollars and when the first 5th gen Camaro ZL1 hit the auction block a few years back, it brought $250,000.

NASCAR team owner Rick Hendrick bought that 5th gen Camaro ZL1 along with a long list of other #1 vehicles over the past decade, so there is a good chance that anyone bidding on the first Camaro ZL1 1LE this weekend will be bidding against one of the nation’s richest and most active car collectors.

Tsingshan's Threat to Tesla: EV Maker Is In Battery Crosshairs
Tesla-Funded Research Reveals One of The Biggest Mysteries of EV Battery
END_OF_DOCUMENT_TOKEN_TO_BE_REPLACED