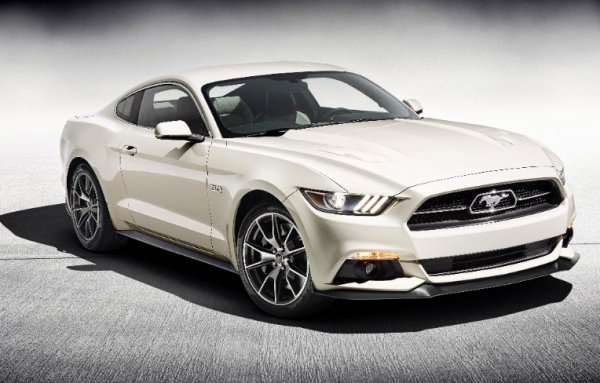 If you want to guarantee that you get one of the 1,964 50 Year Edition 2015 Ford Mustang GT Fastbacks, a Las Vegas Ford dealership can make that a reality with their new eBay listing for one of the limited edition S550 Mustangs – but buying the Gaudin Ford 50 Year Mustang right now will cost you a hefty $100,000.
Advertisement

Anytime that a brand new model with a huge enthusiast community like the Ford Mustang hits the dealership, we know that there are going to be some massive markups. As soon as it was official that the 2015 Ford Mustang would be the first of a new generation, everyone who pays any attention to the automotive world knew very well that we would see some dealerships who get a hold of an early model demanding a price that is way over MSRP. It seems as though the first dealership in the US to post an online auction for their first 2015 Mustang is Gaudin Ford of Las Vegas Nevada, who has listed their 50 Year Edition 2015 Mustang GT on eBay with a Buy It Now price of $100,000.

For those who are unclear as to what is included in the 2015 Ford Mustang GT 50 Year Edition, a quick rundown of the features. The package is built around a fully loaded 2015 Ford Mustang GT Premium fastback in the buyer’s choice of Kona Blue or Wimbledon White with either an automatic or manual transmission. The 50 Year package adds a unique chrome grille, unique chrome taillight trim, some additional chrome along the sides of the car, a special 50 Year Mustang logo on the rear of the car and the awesome louvered rear quarter windows. On the inside, the 50 Year Edition 2015 Mustang features a unique black and white leather interior layout, more 50 Year logos and other bright silver trim that is unavailable on “normal” 2015 Mustang fastbacks. To commemorate the original Mustang that was introduced in 1964, only 1,964 examples of these uniquely loaded Mustangs will be built.

The fact that the 2015 Ford Mustang is the first of a new generation makes them collectable in their own right so the 1,964 50 Year models are just that much more sought after by those who want a truly special Mustang. That high level of demand for a limited edition package obviously comes with great potential for dealership markup, but the $100,000 price requested by Gaudin Ford seems a bit over the top to me.

Owning one of the 1,964 2015 Ford Mustang GT fastbacks with the 50 Year Edition package would be awesome…but is that worth an extra $50,000? The eBay auction suggests that far fewer than the 1,964 produced will actually reach consumers as dealership owners opt to keep their allotted 50 Year Mustang for their own collection. There is a possibility that the 50 Year Mustang fastbacks will be very hard to get and they will all have a huge markup, so paying $100,000 now to guarantee yourself Gaudin Ford’s limited edition Mustang might be the only way to get one. Then again, perhaps there wont be the huge rush that some are predicting and if that is the case, there is a chance that you could buy a 50 Year Mustang off of the lot for a price near MSRP.

Buying Gaudin Ford’s 50 Year Edition 2015 Ford Mustang GT fastback is a gamble…and that is fitting for a dealership based on Las Vegas. If you have the money and want to make darn sure that you get one of these 1,964 special edition Mustangs, you can pull the trigger today and buy it on eBay. The problem with that is you may learn in 4 months that you could have gotten the same car for half as much. On the other hand, you can gamble and hope to get one of these limited edition S550 Mustangs for a more reasonable price, but they might all sell out in a hurry with a huge markup.