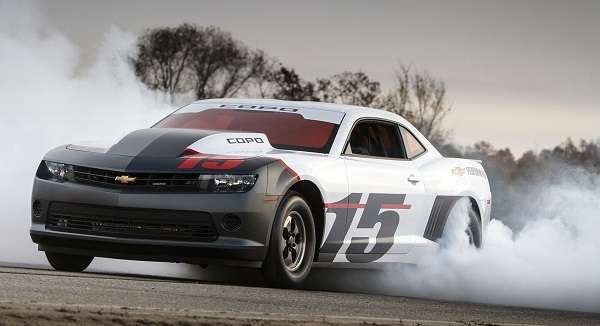 First 2015 COPO Camaro to be Sold for Disabled Veterans

he 2015 model year brings about the final year for the current Chevrolet Camaro COPO factory drag racing package and the first of the 69 units built for 20154 will hit the auction block this weekend with the proceeds going to support the Achilles Freedom Team of Wounded Veterans.
Advertisement

Over the past few years, auctioning off the first unit of a highly sought after vehicle for charity has become “the thing to do” and the latest high profile auction car being the first 2015 Chevrolet COPO Camaro. This factory-built drag car is one of just 69 units that will b built for the final year of the 5th generation Camaro and when 2015 COPO Camaro #1 hits the Barrett Jackson auction block later this week, it is expected to bring big money for the Achilles Freedom Team of Wounded Veterans – a group that helps wounded soldiers in becoming more physically active.

2015 COPO Camaro #1
As has been the case in each of the past few years, General Motors will built 69 examples of the Chevrolet COPO Camaro drag package for the 20125 model year. Due to the extremely low production number volume of these factory race cars, they are extremely hard to get so even when not auctioned off for charity, these high performance, straight line muscle cars demand top dollar. However, the car hitting the block this Friday in Palm Beach will likely be one of the most expensive COPO Camaros, as buyers fight for the right to own the first unit from the final model year of the 5th gen Camaro.

The 2015 Chevrolet COPO Camaro I fundamentally the same as past years, but for 2015, the Camaro drag car comes with a new 350 cubic inch V8 topped by a 2.9L Whipple supercharger. This package is good for around 550 horsepower and with the help of the 3-speed automatic transmission, the track-ready suspension setup and the lightweight nature of the COPO package, this car is capable of blasting down the quarter mile in the 8 second range.
Also new for the 2015 COPO Camaro is the design scheme shown above, but the look and the incredible levels of factory stock performance aren’t why this car will demand big money. When 2015 COPO #1 rolls onto the auction block, bidders will not only be looking to score a piece of very fast muscle car history, but they will also be donating to a very good cause with the proceeds benefitting the Achilles Freedom Team of Wounded Veterans.

Rick Hendrick Might Be the Buyer
Over the course of the past few years, NASCAR team owner and car collecting legend Rick Hendrick has paid very big money at these high profile charity auctions for the first unit of some very powerful American vehicles. Hendrick has purchased another COPO Camaro along with the first example of the new Corvette Stingray coupe, the Corvette Stingray convertible, the Corvette Z06 coupe, the Corvette Z06 convertible and the Dodge Challenger SRT Hellcat. In doing so, Hendrick has effectively donated millions of dollars to charity and when the first 2015 COPO Camaro rolls onto the auction block, he is likely one of the folks who will be bidding on the 1 or 69 drag car.
Considering that Hendrick has paid around a million dollars for many of the cars mentioned above, 2015 COPO Camaro #1 I likely to bring in at least a half million dollars and should the uber wealthy NASCAR owner get into a bidding war, we could easily see another million dollars headed to charity.

The COPO Camaro is set to hit the block on Friday around 5pm so if you have a million dollars laying around and you want to buy 2015 COPO #1 while also helping a very good cause, head on down to the Barrett Jackson Palm Beach auction and prepare to do battle with Mr. Hendrick.

Tesla Contemplates A New Strategy for China Retail even As Sales Boom
Jay Leno on Elon Musk & EVs: “I Think He Should Get ... Credit"
END_OF_DOCUMENT_TOKEN_TO_BE_REPLACED