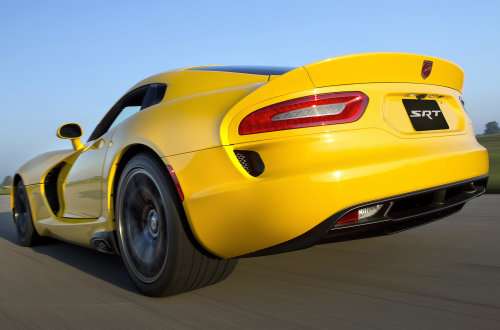 The 2013 SRT Viper might not be reaching the hands of happy new owners until next month but that didn’t stop Edmunds from taking a preproduction Viper GTS to the dyno to see what the newest Mopar supercar puts out at the wheels – with the results being 558 horsepower and 528lb-ft of torque at the rear wheels.
Advertisement

The 8.4L V10 engine in the 2013 SRT Viper is rated at 640 horsepower and 600lb-ft of torque at the crankshaft but in the supercar world, the more important number is just how much power is lost between the crankshaft and the road.

We generally figure a drivetrain loss of about 15% for the average rear wheel drive car but based on the dyno output of 558 wheel horsepower and 528lb-ft of torque, the 2013 Viper is only losing about 12.5% of its horsepower and 12% of its torque so as supercars go – indicating the 2013 Viper is very efficient when it comes to making the most of its available ponies. By the way, that power is enough to hurdle the new Viper from a dead stop to 60 miles per hour in only 3.7 seconds.

Those are all impressive numbers for the 2013 SRT Viper GTS but the bigger question is how does that relate to the competition?

The Viper’s biggest threat right now is the Chevrolet Corvette ZR1. These two American supercars are literally neck-and-neck in every possible performance category but based on Edmunds’ dyno results, the Viper takes a slight advantage in the way of wheel horsepower.

The Corvette ZR1 offers 638 horsepower at the crankshaft and in doing a little research at Corvette enthusiast sites like CorvetteForum.com, it seems that a factory stock ZR1 makes somewhere in the area of 540-550 rear wheel horsepower with things like the weather, the elevation and the dyno itself playing into the variance between the result figures.

However, while the Viper seems to offer more power at the crankshaft and at the wheels, with a 0-60 time of 3.7 seconds the Viper is a few tenths behind the ZR1 although I should stress that these numbers are all independently conducted so they should all be taken with a grain of salt.

One thing that has become very clear about the battle being waged between the Chevrolet Corvette ZR1 and the 2013 SRT Viper GTS is that the winner will only be decided on the roads and raceways of America in a tooth-and-nail battle that will be decided more on a individual basis than a global one. In short, the ZR1 and Viper GTS seem to be closely enough matched that it will come down to which driver can better handle the car which they are piloting.

The new Corvette ZR1 has begun breaking records set by the previous generation Viper at tracks like Laguna Seca but as Chrysler’s SRT group continues to send out new Vipers – I fully expect to see track times for the newest Mopar supercar as soon as this spring or in the early summer.

Check out the 2013 SRT Viper GTS dyno video from Edmunds.com below!

mopartodd wrote on January 4, 2013 - 8:29am Permalink
Yeah, as cool as the Viper may be, the Vette still delivers more power and torque, with a smoother curve, throughout the power curve. Hate to say it, but Chevy wins this round...
Patrick Rall wrote on January 6, 2013 - 12:19am Permalink
From what we are seeing so far (based on fairly limited testing), the new SRT Viper wont even beat the previous generation Viper ACR although many expected that the "old" ACR would be the benchmark for the 2013 Viper. Id like to believe that Chrysler wouldnt make all of the fuss (accompanied by tons of internal ZR1 testing - some of which I saw in person) only to be beaten by the current ZR1. So does Chrysler have more up their sleeve or have they somehow missed the mark?
Austin wrote on January 5, 2013 - 12:12am Permalink
Ummm ok let's dyno the Viper but why use a "pre-production" model? And why now? Deliveries start in the next few weeks so getting a production model should not be hard. Not sure the point of thus video.
Patrick Rall wrote on January 6, 2013 - 12:09am Permalink
In most cases where a new car like the Viper is dyno tested by a third party (generally the media), they have a preproduction as the actual production models arent going to be handed to the media for testing. This is a very common practice.