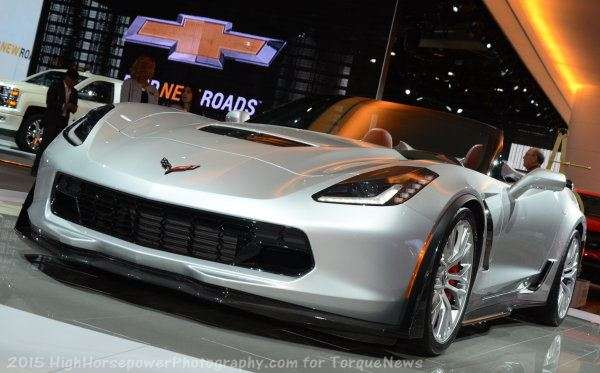 The 2016 Chevrolet Corvette Stingray and Z06 are on sale now and with the 2015 model year being wrapped up, our Chevy dealership friend has sent over the final production numbers for the 2015 Corvette in Stingray, Z06, Coupe and Convertible form.
Advertisement

2015 Corvette Production
First and foremost, the total production numbers for the 2015 Chevrolet Corvette. When the Stingray and Z06 coupes and convertibles are all added up, General Motors sent out 34,240 new Corvettes into the world for the 2015 model year. Even though there were two trimlines for 2015 and only one for 2014, there was a drop in 2015 from the 37,288 new Corvettes in the first model year of the C7 generation.

Option Popularity
The most popular option for the 2015 Corvette was the performance exhaust system, which was fitted up to 30,896 of the 34,240 new GM sports cars built for the 2015 model year while navigation was the second most popular with 25,803 (75%) coming with the map program. The new 8-speed automatic transmission was the next most popular option for the 2015 Corvette in both Stingray and Z06 form, with 23,232 examples (68%) of the Corvette in 2015 coming with this lightning-quick, self-shifting gearbox. More importantly, of the new Z06 coupes and convertibles sold for 2015, around 4,400 had the manual transmission while the other 4,200 or so had the automatic – so even in the most track capable Corvette of all time, the automatic transmission is quickly catching the manual.

Other popular options include the Stingray Z51 package (53%), a little more than half of which came with the Magnetic Ride Control suspension system (29% of total production) and while it isn’t technically an option, a whopping 86% took the standard GT seat over the competition seats.

Color Popularity
For the 2015 model year, the most popular exterior color for the Corvette was Arctic White (19%), followed by Torch Red (16%), Black (15%) and Shark Gray (15%). The least popular color was a tie between Night Race Blue and Daytona Sunrise Orange at just 4.1% each along with Blade Silver at 5.2%.

For a look at the 2014 Corvette production numbers, click here!