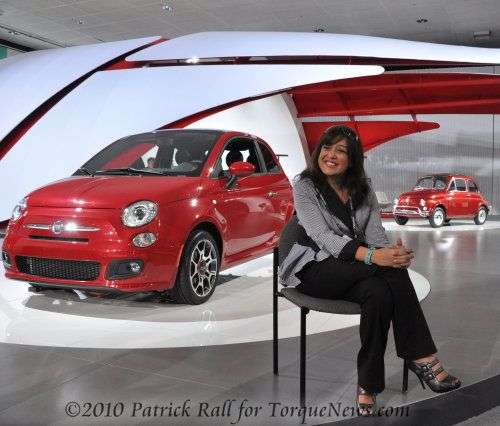 The 2011 Fiat 500 has become a fairly regular presence around the Detroit area, having been shown off at a variety of auto shows over the past year but at the 2010 LA Auto Show, the Italian automaker official made its grand debut back into the American automotive industry. Company CEO Laura Soave was delivered to the stage in a 1968 Fiat 500 before addressing the huge crowd and towards the end of her speech, a trio of 2011 Fiat 500s rolled onto the stage.
Advertisement

Representing all three of the current trimlines (pop, sport and lounge), the US-Spec Fiat 500’s on display give show-goers a look at the cars in the three available colors of the limited edition Prima Edizione models. These first 500 units, all of which are spoken for, will kick off of the return of the brand in the US but once the regular production 500s reach showrooms early next year, 14 exterior colors will combine with a myriad of interior options for over a half million different customizable configurations according to the folks at Fiat.

The EPA has not yet released the official mpg ratings for the sporty new Italian subcompact but during her speech, Soave announced that the 2011 Fiat 500 comes with a base price of just $15,500 – almost $5,000 cheaper than the Mini Cooper that looks to be the 500s main competition.

During a discussion with CEO Laura Soave after the big announcement, she confirmed that following the initial launch of the 2011 500 in the US, we can expect a convertible later during the 2011 year and an electric model in 2012. Also, Soave told TorqueNews.com that in 2013 we can expect to see a high performance Abarth model but for those who cannot wait that long, Mopar will offer some performance goodies for the 500 and once the vehicle has been launched in the US, we can also expect some aftermarket support from companies already working with Fiat in the European market.

The Fiat 500 is expected to fall into a niche market, similar to that seen with the modern MINI, so it is no surprised that the 500 will receive many of the same forms (coupe first, then convertible, electric model and performance trim) as the German competitor. We are still waiting on all of the official details for the North American 2011 Fiat 500 but with a price of just $15,500 the sporty Italian subcompact is off to a good start before reaching showrooms.

Click here for a closer look at the Fiat display from the 2010 LA Auto Show.