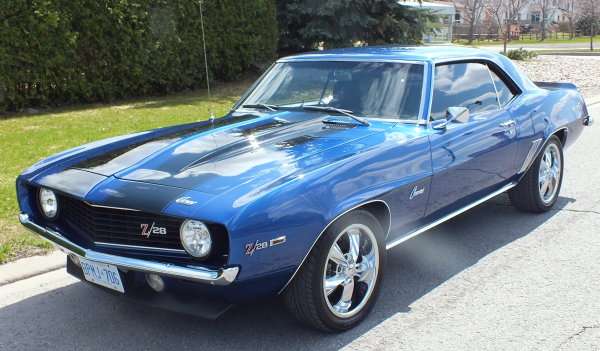 The TorqueNews/Camaros Unlimited Camaro of the Month for February 2016 is the pristine 1969 Chevrolet Camaro Z/28 shown above, owned by Jim Calombaris.
Advertisement

For February 2017, the Camaro of the Month is the gorgeous 1969 Z/28 owned by Jim Calombaris. We reached out to Jim for the story on his classic Z/28 and this is what he had to say.

Here is my story of my Z/28!
It was built in Norwood, Ohio and was an Arizona car most of its life. It was imported into Canada approximately 10 to 12 years ago. It changed hands in Canada from the person that originally imported it to his friend and then it became mine! The car came with a 350 Vortec small block, a 5 speed Tremec 600lb/ft-capable manual transmission, a 12-bolt 4:10 gear ratio differential and Flowmaster dual exhaust! The best thing is at 60 miles an hour at highway speed, the engine is purring at 2200 RPM due to the overdrive of the transmission. It also was fitted with a new late model fuse box and wiring throughout the vehicle. How perfect was that, at least to me!

After the test drive it was very obvious to me that I needed to get this car in my name! As always, it now came down to money. We talked a bit, and then gave him my offer! It was $5000 below what he was asking. He didn’t bite my head off but kept trying to negotiate! I said, look, I am here, I have the cash, lets get this deal done! He then turned to me, and said, okay and shook my hand. The rest is history!(More on Page 2)

It was just a dream come true! I was driving it back from the owners place to my cousins and saying to myself, did this just happen? As with any car guy, you just can’t let things be left alone! Since owning the car, I have done some minor and major mods! I have changed the radiator to a heavy duty aluminum radiator, changed the rear drums to disc brakes and calipers, added front SSBC calipers to the cross drilled and slotted disc rotors. I added MSD multi spark ignition to the HEI distributor to aid in the firing of the platinum spark plugs. The major mods I have done was one, changed the timing chain to a timing gear that sounds like a supercharger and two, is that I changed the Vortec heads to Edelbrock aluminum big valve heads with stainless steel 1.5 ratio rocker arms, combined it with Edelbrock EFI system. What a change! I can only describe it to you this way! If you never knew what I did, you would swear that I dropped a big block in the car. It was that much more of a significant horsepower and torque gain with a great performance gain like starting and throttle response!

One funny little note: as car guys and gals are known to name their cars, my wife has named her “Precious” as she tells me that I take better care of the car than I do of her, but I call her “Blue Deuce”.

She has won about 5 awards, ranging from 1st place to people choice awards! I am truly blessed and humbled to own such an iconic muscle car - which will be celebrating “The 50th Anniversary” this year – and it makes me smile every time I get in it!
Let’s have a great year to all the car guys and gals out there!