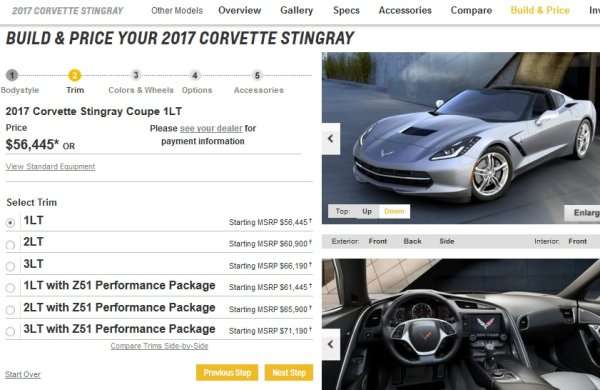 The full pricing schedule for the 2017 Chevrolet Corvette Stingray and Grand Sport has arrived online and the price increases for the new model year Stingray are fairly minimal at just $50 extra across the entire model range – while the new 2017 Corvette Grand Sport starts at $66,445.
Advertisement

While Chevrolet Camaro sales have remained much lower than I would have expected for the new generation, sales of the C7 Corvette have remained strong since the car went on sale back in 2013. Sure, there have been some ups and downs over the past 3+ years, but the Corvette has continued to comfortably outsell every competitor in the American premium performance car segment.

Perhaps in an effort to keep interest and sales numbers high, General Motors has opted to apply a very modest $50 price increase to the entire Corvette Stingray lineup for the 2017 model year. Realistically, that price increase won’t make any difference to anyone buying a new Corvette this year, but for the sake of discussion, here is a quick look at the pricing schedules for the 2017 Corvette Stingray.

2017 Corvette Stingray Coupe and Convertible
The 2017 Chevrolet Corvette Stingray will still be offered in six basic trimlines, whether you are ordering a coupe or convertible – 1LT, 2LT, 3LT and each of those trimlines with the optional Z51 performance package. Nothing in the trimline hierarchy has changed for the new model year.

2017 Grand Sport is a High Performance Bargain
The biggest Corvette news thus far for 2017 is the return of the Corvette Grand Sport. This new high performance package recently placed 4th among production cars and with a price starting at just $66,445, it is easily one of the most affordable cars towards the top of the Lightning Lap list.

No Z06 Pricing Yet
Oddly, while Chevrolet.com has full pricing for the 2017 version of the Corvette Stingray and Grand Sport, only 2016 pricing and information remains for the Corvette Z06. Little has been said about the supercharged beast, but with rumors that GM is hard at work on a cooling solution, the company might be holding off on announcing pricing until they have offered up new performance information. Word on the street is that the Z06 will be getting an improved cooling system and that could be what the company is waiting for before adding the 2017 Z06 to the website.