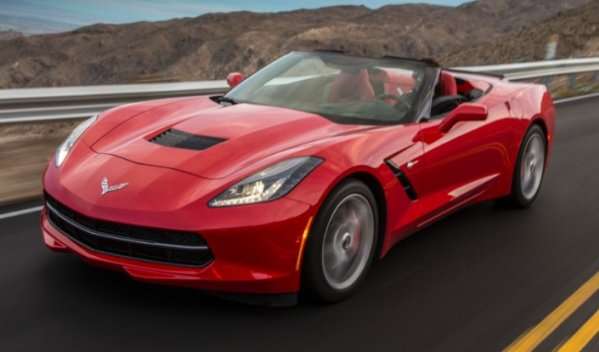 Even though the new Chevrolet Corvette Stingray had a slow month while both the Porsche brand and the Dodge Viper had strong months, the GM sports car still outsold its closest competitors in the US market by a massive margin – even if you combine the sales numbers of the Porsche cars and the Viper.
Advertisement

September 2014 wasn’t a great sales month for the Chevrolet Corvette Stingray with 2,467 units sold accounting for the third worst month since the C7 Corvette was introduced last October. However, the car that critics said was doomed to fail due to the striking new design isn’t just beating its competitors – it is slaughtering them…even if you combine the sales numbers of the closest competition.

Corvette Stingray Versus the Competition
September 2014 was like the perfect storm for the Chevrolet Corvette, as one of its worst sales month was met by a very strong month for Porsche in the US and a record month for the Dodge Viper. It seems as though the conditions were perfect for the lineup of Porsche cars to sell more units than GM sells Corvettes, but it wasn’t meant to be as GM sold more Corvettes than Porsche sold cars. Porsche sold 520 copies of the Boxster and Cayman, 739 copies of the 911 and 918 and 450 copies of the Panamera. The 911 is the Corvette’s closest competitor in performance while the Boxster and Cayman are the closest competitor in terms of price so which do you pick for a good comparison?

It doesn’t matter which one you pick because with 2,467 Corvette coupes and convertibles sold last month, the modern Stingray killed the Porsche counterparts. We can take the comparison one step further and add up all of the Porsche cars, which gives us a total of 1,709 new Porsche cars (not including Cayenne or Macan SUVs) – more than 700 units less than GM sold just the Corvette.

Also, while the Dodge Viper costs significantly more than the Corvette Stingray, the fact that they are the only two American premium performance cars leads everyone to compare the two. It also helps the even the base Stingray can keep up with the Viper in some performance competitions, but even in the best month for the modern Dodge Viper – the Corvette still moved almost 23 times more units than the Viper.

Corvette Sales Could Have Been Better
When looking at the slow sales of the Chevrolet Corvette Stingray in September 2014, we should keep in mind that there were two separate issues last month that likely slowed Stingray sales. First off, there was the stop sale order over the concerns with the driver’s side airbag system and secondly, there is the legal concerns over the Valet Mode in the Performance Data Recorder. When you combine those issues with the unseasonably cool weather in many areas as we approach winter, it doesn’t come as a huge surprise that Corvette sales numbers were down last month.

However, with the airbag issue addressed and the Valet Mode fiasco being handled, some of the sales that were prevented last month should help improve numbers this month. I would also expect to see an increase in sales as more 2015 models reach dealerships around the country, so expect to see the Corvette continuing to dominate the premium performance car segment well into the foreseeable future.