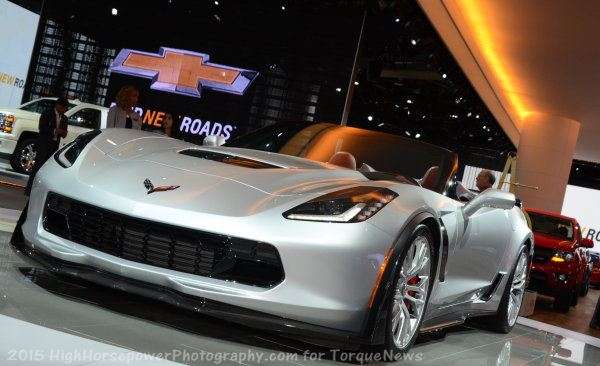 Even in an Awful Month, Corvette Pummels Porsche Car Sales

The Chevrolet Corvette posted its worst sales month since the new C7 Stingray was introduced in October 2013, but even in a record-low month – the Corvette still comfortably outsold the next closest premium performance car sold in America, beating the Porsche 911 by a rate of almost 2-to-1.
Advertisement

First, since there has been some question from readers as to why I compare the sales figures for the Chevrolet Corvette to those of the Porsche brand cars, we should all keep in mind that the closest competitor in terms of performance and amenities in the US market is the Porsche 911. However, the 911 is more expensive than the Chevy, leaving the Porsche Boxster/Cayman duo to be the more closely related of the Porsche cars to the Corvette. In any case, behind the Corvette, the next bestselling premium sports car in the US is the Porsche 911 and for that reason, I like to look at how well the Corvette is selling relative to the rest of the closest competition.

Really, there is no good comparison vehicle in the US market for the Chevrolet Corvette, which only goes to show why the C7 is selling so well and why the Corvette is so very good in every way.

Corvette Leads through Sales Slump
Winter has hit the United States very hard over the past few weeks, with many parts of the country getting more snow than at any other point this year. That influx of snow leads to decreased interest in performance cars for many buyers in areas that see frigid temperatures, so it doesn’t come as a big surprise that Corvette sales were down last month. It does come as a bit of a surprise that the Corvette posted the worst monthly sales figures since the C7 first went on sale, but with 2,127 new models sold in January, the legendary Chevy was still the bestselling premium sports car in the US. Also, the Corvette was the 4th bestselling sporty car overall, behind only the three American muscle cars.

Corvette Versus the Competition
The closest competitor to the 2015 Chevrolet Corvette lineup is the Porsche 911 lineup, but even in a month where the Vette saw its worst sales in more than a year, the Chevy still slaughtered the 911. Porsche only sold 1,086 911s in January, meaning that the Corvette outsold the 911 by a margin of nearly 2-to-1. Some Porsche fans my point out that it isn’t a fair comparison since the 911 costs so much more, but the Porsche Boxster and Cayman are much more closely priced – and the Corvette still stomped both of those cars in January sales. Porsche sold 502 examples of the Boxster and Cayman combined, so the more affordable Porsche sports cars were even less competitive than the far more powerful 911.

When you add up the January sales figures for the Porsche 911/918, the Boxster/Cayman and the 4-door Panamera, the German sports car builder moved 2,025 new cars last month – 102 cars less than GM sold Corvettes.

In other words, even in a month where the Corvette sees its worst sales in the current generation, the Chevy can still best the Porsche 911 and the rest of the Porsche cars combined. This leaves little question who makes the most popular premium sports car sold in the USA and based on performance numbers, the Corvette leads in sales because it is dollar for dollar one of the best sports cars sold in the USA.

PorscheFan wrote on February 4, 2015 - 11:46am Permalink
It is not so much an unfair comparison as an illogical comparison: you are comparing a single model to an entire manufacturer's lineup. Yes, I know, it still leans in Corvette's favor. But it does point out that anyone can own a Chevy...
Patrick Rall wrote on February 5, 2015 - 12:18am Permalink
I also made a very clear comparison between the sales of the 911 to the Corvette, and the sales of the Cayman/Boxster to the Corvette...both of which are fair comparisons in their own way, which I also addressed.
Doc423 wrote on February 4, 2015 - 5:32pm Permalink
So true PorscheFan......it's like comparing Jack Daniels whiskey to Chivas Regal Scotch whiskey....many of us (me) would prefer to pay more for higher quality, that not every other Tom-Dick-&-Harry is drivin'n around in....no different than seeing Camrys and Accords on the road. Oh, look another C7....ho-hum.
Chris Morea wrote on February 9, 2015 - 12:43pm Permalink
your number comparisons are not logical, Porsche makes a ton less cars then GM, Chevy sold 2000 vettes in Jan, but Porsche didnt build that many carreras in December to sell in January. Total carrera coupes built in Dec allocation about 350... Please stop with the publicized twists on numbers
Mike Farr wrote on March 6, 2015 - 9:56am Permalink
Great comparison, the new corvette is an engineering masterpiece compared to Porsche! Incidentally most can't tell the last 3 generations from the latest generation. Not to mention every dash from 911 to boxer/cayman are the same! Potsche is the most profitable car company for a reason there parts bin is used on all there cars! I guess some choose for the name I choose for the performance - 2015 ZO6 faster then the 918 around VIR!
porschefan wrote on March 6, 2015 - 12:16pm Permalink
Well considering VIR is damn near a home track and that lap was with GM's hottest 'vette shoe, and not some C&D writer on a review assignment, kudos to the plastic car. Take it to the 'ring, then we'll talk.
Mike Farr wrote on March 6, 2015 - 6:50pm Permalink
Interesting considering the 2015 zo6 has mor real carbon fiber then any Porsche made except the million dollar 918! In regards to the ring the only Porsche faster than the last generation C6 corvette around the ring is the 918! Name & shipping I guess is an expensive option! I don't thi it will be faster than the 918 at the ring but it will be the next fastest & for 100k - I have 900k to play with.