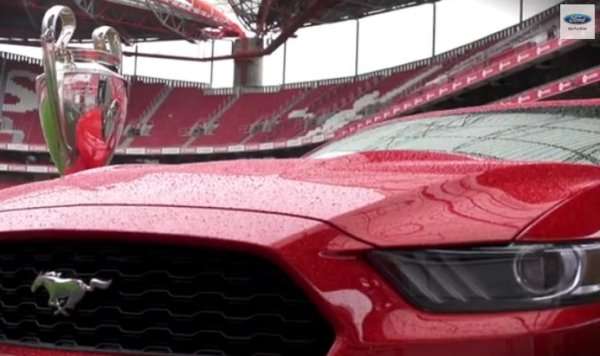 We don’t know exactly when the 2015 Ford Mustang will go on sale here in the US, but those folks in Europe who want to buy one of the very first 500 Mustangs across the pond will be able to place their order on May 24th at the UEFA Champions League Final game.
Advertisement

The Union of European Football Associations (UEFA) final on May 24th is the biggest sporting event of the year in Europe, with all of the top football teams (Americans would call them soccer teams) competing for the title of Europe’s greatest team, so it is fitting that the 2015 Ford Mustang will go on sale for the first time at the big game. Throughout the course of the championship football game in Lisbon, Portugal, those fans who want to own one of the first 500 2015 Mustangs shipped to Europe can place their preorder.

“The arrival of the new Ford Mustang in Europe is an event that deserves the biggest possible stage,” said Roelant de Waard, vice president, Marketing, Sales & Service, Ford of Europe. “We hope that making the first models available to order at the exact moment the Final kicks off will ensure a reach which matches the significance.”

There are a few interesting stipulations for those European football fans who plan to order their 2015 Ford Mustang at the UEFA Champions League Final. First, as mentioned above, preorders at the game are limited to 500 units. Considering that the stadium hosting this massive championship game holds almost 66,000 people, I would expect that at least 500 of them will be interested in preordering a new Mustang. Second, there are limited options for buyers at the game so while UEFA fans can order either the 2.3L EcoBoost 4-cylinder mill or the mighty 5.0L V8, the 2015 Mustang fastback can only be ordered in Race Red while the 2015 Mustang convertible is only available in Magnetic.

In addition to being on display during the UEFA Champions League final game, I would expect that Ford Motor Company will have further product placement – perhaps something in the view of the game coverage cameras and also television spots for the expected global TV crowd of more than 165 million viewers.

Even if there is only an on-site presence for the 2015 Ford Mustang at the UEFA championship game, I would expect that this will expose a great many prospective buyers to the first Mustang marketed on the global level. Of course, this will also be the first time that a great many younger future car lovers will see the Mustang and when you consider how many Mustang lovers first experienced the passion at a young age – this partnership with the UEFA Champions League could help to build enthusiasm among the gearheads of tomorrow.

There hasn’t been any word from Ford Motor Company as to when dealerships around the US will officially begin taking preorders on the 2015 Mustang, but I would have to think that the company would open up orders to the domestic market ahead of taking European orders. In other words, with the European market getting to order an S550 Mustang on May 24th, I would expect that American buyers will get their chance to place a preorder for the next generation pony car sometime in the next week.

To celebrate and announce the preorder program at the UEFA Champions League final game, Ford Motor Company has put together the video shown below.