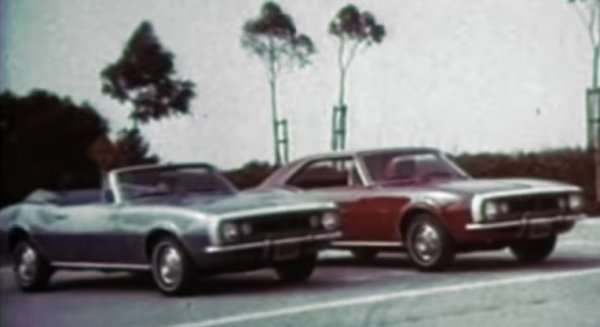 General Motors is planning a massive celebration for the 50th anniversary of the Chevrolet Camaro at the upcoming Woodward Dream Cruise, but before then, the automaker is offering up all sorts of historical Camaro information – including a pair of videos compiling company footage of the legendary muscle car from the past half century.
Advertisement

The Chevrolet Camaro was introduced for the 1967 model year, so with the arrival of the 2017 models comes the 50th anniversary of the legendary muscle car. General Motors has planned a few days of festivities around the Woodward Dream Cruise in August, including a huge car show at the Lansing Grand River Assembly Plant where the 6th gen Camaro is built, a special “Camaros and Coffee” car show at Detroit’s Joe Louis Arena and a Camaro-centric display at the Dream Cruise.

Those Camaro fans who make the trip to Metro Detroit for the 50th anniversary celebration on August 18-20 will most certainly enjoy themselves, but GM isn’t waiting until August to reflect on the history of the Camaro. GM has put together a celebration-specific web page with all of the information on the Woodward-based events as well as a look at the past 50 years of the Camaro. The first look back from GM is a video which shows the Camaro over the years, starting back in 1967 and continuing through the 2016 models – taking a quick look at each generation along the way.

Also, while not posted on the 50th anniversary website, another video with almost 19 minutes of historic GM footage has popped up online, offering a more elaborate look at the history of the Camaro over the past 50 years.

6 Generations in One Video
First up, we have the video posted on the official 50th anniversary website, which shows the Chevrolet Camaro during each of its six generations. This video starts with the original Camaro back in 1967, then moves onto the 2nd generation in 1970, the 3rd generation in the early 1980s including the 1984 IROC Z, the early 4th gen Camaro from the 90s and the 5th gen Camaro – before finishing up with the new 2016 Camaro. This all takes place in the span of a minute, so we only get a quick look at each of the 6 generations, but it really is a great video.

This video starts with the original 1967 Camaro commercial, which shows the 1st Chevy muscle car emerging from a volcano, followed by a silent rolling footage video of the 1969 Camaro. For the 2nd generation, this video gives us a great look at the 1970, 1978 and 1980 models before touching briefly on the 3rd generation car in 1985.

The 4th generation Camaro is introduced in this video by showing the car on the assembly line, followed by silent rolling footage of the 1993 Camaro and 2002 rolling footage with plenty of LS1 sound.

Finally, this longer video relives the debut of the 5th gen Camaro in 2009, followed by silent rolling footage of the 2011 Camaro 2LT RS.

So, if you have 20 minutes to burn on this balmy summer’s day, grab a drink, kick back and enjoy these two videos showing the history of the Chevrolet Camaro in historical footage from the last 50 years.