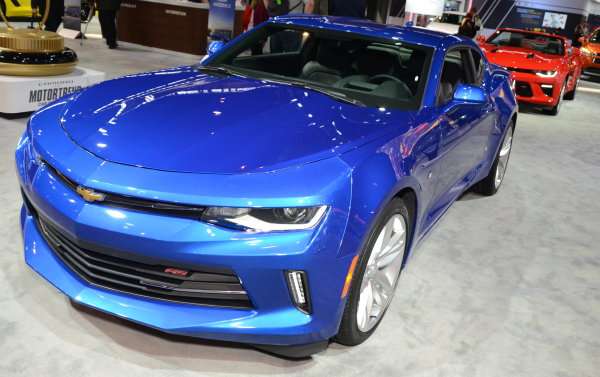 The 2016 Chevrolet Camaro has been reaching new owners since last October and after roughly 5 months of deliveries, some sales mix numbers indicating which options have proven to be the most popular have arrived online – including the SS package with the LT1 V8, the 8-speed automatic transmission, the dual mode exhaust system and Hyper Blue Metallic exterior paint.
Advertisement

Edmunds recently spoke with Chevrolet marketing manager on the early sales mix for the 2016 Chevrolet Camaro, and while they haven’t offered up a detailed breakdown, they did lay out some of the key selection figures for the 6th gen GM muscle car.

V8 and Automatic Transmissions
Over the course of the first 5 months of 2016 Chevrolet Camaro sales, “more than half” have opted for the Camaro in 1SS or 2SS form, meaning that at least 51% have gone with the LT1 V8 with 455 horsepower and 455lb-ft of torque. Since the turbocharged 4-cylinder and supercharged ZL1 haven’t gone on sale yet, we know that all of the Camaros ordered thus far that did not have the LT1 V8 had the 3.6L V6 with 335hp.

In terms of transmission options for the 2016 Camaro, around 20% of those folks who bought the SS packages opted for the 6-speed manual transmission and for the V6 Camaro, only around 15% went with the 3rd pedal models – meaning that roughly 80% of Camaro SS models and roughly 85% of Camaro V6 models sold thus far had the 8-speed automatic.

I should also point out that the new convertible is not on sale yet, so every new Camaro thus far is a coupe.

Add-Ons and Paint Choices
Among the 2016 Chevrolet Camaro SS buyers, a whopping 75% have ordered cars with the driver-controlled dual mode exhaust system while among Camaro V6 buyers, roughly half of the crowd has added the sporty RS appearance package.

So, right now, it seems that the most “unusual” 2016 Camaro is an LT V6 model with the manual transmission and without the RS package, while the Camaro SS with standard exhaust and the manual gearbox is the least common V8 construction.

Finally, Edmunds explained that Hyper Blue Metallic has been very popular early on, along with black and white, but Red Hot, Bright Yellow and Blue Velvet have all been selling well in the first few months of 6th gen Camaro sales.

More Options Coming Soon
While the 2016 Chevrolet Camaro has turned in strong enough sales early on that dealers are left waiting for the plant to build custom ordered muscle cars, we can expect to see a boom in sales over the next few months as both the new turbocharged 4-cylinder package is introduced with segment-leading fuel economy numbers, along with the arrival of the 6th gen Camaro convertible. The introduction of the fuel-friendly turbo model and the drop-top model will help grow sales through the summer, followed by the arrival of the road-race ready 1LE and the 640 horsepower Camaro ZL1 later this year.

Tesla Giga Berlin's New Hurdle: It's Not Only the Gov't, but Now Tesla Itself
Teslas Are Sold Out Until 2023, But The Timing May Reverse
END_OF_DOCUMENT_TOKEN_TO_BE_REPLACED