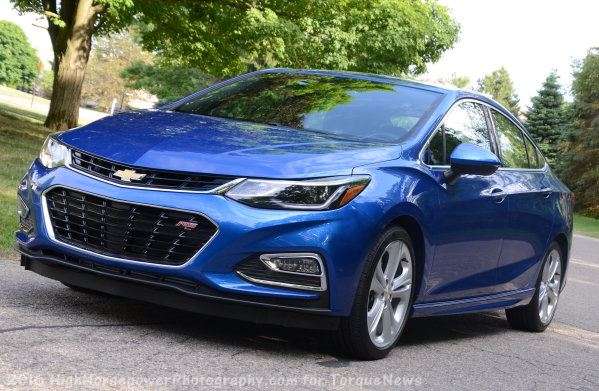 Driving the New Chevy Cruze Premier: Better in Every Way

I recently spent a week driving the all-new 2016 Chevrolet Cruze Premium and while I really liked the previous generation of GM’s hot-selling compact sedan – this new Cruze is at least a little better in every way.
Advertisement

Over the past few years, the Chevrolet Cruze has been one of the bestselling cars for General Motors while also being among the most popular models in the compact sedan segment. However, with the compact market being so competitive, GM looked to stay ahead of the curve by introducing an all-new Cruze for the 2016 model year. Like all of their new models, Chevrolet went with a more aggressive exterior design for the 2016 Cruze and they packed the interior with a long list of premium features – particularly in the range-topping Premier trimline which I spent the week driving. Chevrolet also trimmed up the engine option list and made some suspension changes to make the 2016 Cruze a smoother, more enjoyable car to drive – at least that was their intention.

2016 Chevy Cruze Premier Pricing
My 2016 Chevrolet Cruze test car was outfitted with the features of the top of the line Premier package, which carries a base MSRP of $23,120. When you add on the Sun & Sound w/Navigation package ($1,995), the RS package ($995), the Enhanced Convenience package ($865), Driver Confidence II package ($790), the upcharge for the Kinetic Blue Metallic exterior paint ($395) and destination fees, my Cruze Premium had a price as tested of $29,035.

That might seem like a hefty price for a compact sedan, but you have to keep in mind that this is the premium trimline for the 2016 Chevy Cruze and my test vehicle was fitted with pretty much every option – and all of those optional features play a role in making this such a remarkably well equipped small sedan.

The Exterior
The entire lineup of the new 2016 Chevrolet Cruze received a major refresh, with a sleeker, sportier feel from front to back. While the previous Cruze wasn’t boxy by any measure, the 2016 model has a more low slung, slippery design and when you add on the RS package, this new Cruze is leaps and bounds more aggressive on the outside. The RS package adds a sport body kit that gives the new Cruze a lower look from every angle, with the most significant features being the unique front fascia with a larger lower grille opening – finished in gloss black and accented with RS badging – and the unique rear fascia with matte black trim flowing up the rear reflectors. The RS package also adds 18 inch aluminum wheels, fog lights and a rear spoiler, all of which play a big part in making the my Cruze test offer such an appealing, aggressive look.

Finally, when you take into account the automatic Intellibeam projection headlights with Led daytime running lights, the LED tail lights and the Kinetic Blue Metallic paint – the 2016 Cruze Premier with the RS package is easily one of the
I like the look of the 2016 Cruze and I think that the move to this more high tech, aggressive design was a great move, but the exterior is just the beginning of the improvements for this compact sedan.

The Interior
The real story with the new Chevy Cruze is the interior – an area in which past American small sedans have really rated poorly in side by side comparisons. For a very long time, the interior of a small, low cost American sedan was as bare as possible, but the 2017 Cruze is as heavily appointed from top to bottom as some smaller luxury sedans.(More on Page 2)

When you open the driver’s door of the 2016 Cruze Premier, you are greeted by a leather clad driver’s seat that is heated, power adjustable and nicely padded – with hip and side bolsters that are deep enough to provide some lateral support, but they aren’t deep enough to squeeze larger drivers and passengers. The rear seats are comfortably padded and the outboard positions are heated as part of the Advanced Convenience Package, but as is generally the case, the middle seat is tight, poorly contoured and, really, it should be reserved for small children. Aside from the rear center seat, the 2016 Chevrolet Cruze offers a ton of passenger space up front for even very tall drivers, while the rear seat has an impressive amount of leg room for a compact sedan, even with the front seats moved back far enough to accommodate a 6 foot tall adult. The center armrest between the front seats is a little on the narrow side, so the driver and front passenger might be fighting for elbow room for time to time, but in every other key dimension – the Cruze is as spacious as it is comfortable. Also, even with the spacious cabin, this new Cruze still has a huge trunk, with plenty of space for golf club bags, hockey bags or a weekend’s worth of luggage for a small family.

The Advanced Convenience Package that heats the rear seat also adds power windows all around with driver’s window express control, automatic climate control, an automatic dimming rear view mirror, a 110V power outlet and one of my favorite small features of the new Cruze – a wireless cell phone charging station. At this point in time, with pretty much everyone having a cell phone, something like a universal wireless charging station should be available in every car, if not standard, and the new Cruze gets that right.(More on Page 3) Next, we have the premium Chevrolet MyLink infotainment system, which is equipped as part of the Cruze Sun & Sound Package. In addition to the 8 inch touch screen which controls pretty much every aspect of the interior – from navigation to the sound system to the hands-free phone system to the various available apps – this package adds a power sunroof, a Bose premium 9-speaker sound system and the multi-color driver information screen. At $1,995, this package is pricey, but for the sunroof, the infotainment system with the Bose speakers and the advanced driver information screen in the gauge cluster, I consider this a must-have for the full Cruze Premier experience. The Bose sound system is impressive regardless of your favorite type of music, the navigation system is user friendly from the first time using it and the sunroof – well, I like having a sunroof.

Of course, the premium infotainment system of the 2016 Cruze Premier includes satellite radio, Bluetooth and USB input, and full system compatibility with Android Auto and Apple CarPlay. If you don’t like the touch screen, you can perform pretty much every task in the system with the voice control, the buttons on the steering wheel or the small spread of buttons and knobs just below the touchscreen – although getting a grasp of the easy-to-use touchscreen system will unlock the full potential of this system with very little learning curve. Also, like most new Chevrolet products, the Cruze has built in Wi-Fi that allows your kids to access their favorite websites during a long ride without burnout through your cell phone’s data plan. The 2016 Chevrolet Cruze Premier has a price tag as test under $30k, but for that price you get everything mentioned above – leather heated front and rear seats, a premium infotainment package packed with key applications, built-in internet, an excellent Bose speaker system and plenty of space for four adults. The Cruze with all of these packages includes many of the features of modern luxury cars, but Chevy is able to offer all of those goodies for a very low price.

In short, the interior of the Cruze Premier packs just about everything that Chevrolet has to offer with a ton of passenger space in a compact sedan – making this very different from the compact American sedans of yesteryear.(More on Page 4)

The Drive
Every 2016 Chevrolet Cruze is powered by the same turbocharged 1.4L engine, delivering 155 horsepower and 173lb-ft of torque to the front wheels via a 6-speed automatic transmission. During the previous generation of the Cruze, my favorite engine was the small diesel and right now, that engine is not available, but the 1.4L gas engine still does a great job of motivating the new Cruze. While this isn’t a car that is going to be mistaken for a compact sport sedan, it packs plenty of power to get up to speed with quick moving traffic from a stop, while also being able to comfortably cruise above any posted speed limit. Also, while driving on the highway at higher speeds, pushing the pedal to the floor will allow you to quickly build speed to zip around slower moving traffic. The power likely wont wow most drivers, but the Cruze has a solid amount of power for the majority of drivers who are considering a car in this segment. More importantly to some, the 1.4L engine allows the Cruze to receive an EPA estimated 40mpg on the highway and when I made a 100 mile highway drive, I was able to achieve just under 41mpg. Based on that, I expect that someone who is driving specifically to get good fuel economy will have no issues beating the EPA numbers and with better than 40mpg – the Cruze is one of the more efficient non-hybrid gas vehicles on the market.

Next, we have another area where compact American sedans have struggled in the past – ride quality and handling. The 2016 Cruze Premier features a unique suspension package with a specially tuned front setup and a Watts link rear setup, and these unique components team up to make the Cruze Premier surprisingly smooth on even the rough Detroit area roads, but it also affords this small Chevy sedan with solid handling capabilities. This setup allows the Cruze Premier to recover more quickly when cutting back and forth through alternating turns while also offering better dampening when you hit dips and bumps with the front wheels. I wouldn’t exactly call it a performance suspension setup, as it lacks the stiffness of a proper sport setup, but the suspension of the Cruze Premier offers a better combination of handling and ride quality than the lower trim Cruze – or some of the competitors. Ultimately, the 2016 Chevrolet Cruze presents an evolutionary improvement from the previous generation, and while the power and fuel economy isn’t greatly improved – the ride quality and handling of the new Cruze makes this a better car to drive in every situation.

The Final Word
As much as I liked the first Chevrolet Cruze, the new 2016 Cruze is better in every way – if only by a small margin. The commercials for these vehicles might seem exaggerated (and they are), but it is completely fair to say that the cabin of the new Cruze is more like a luxury car than a compact economy sedan. Driving a small American sedan no longer means living without modern nicities and the new Cruze proves that you can have all of those interior features, a powerful-yet-efficient drivetrain and a roomy cabin without spending a fortune.

If you are looking for a new small sedan that is fun to drive, efficient, roomy and packed with modern technology for under $30k – the 2016 Chevrolet Cruze Premier is one of your best choices on today’s market. With the available upgrade packages, the Cruze Premier is worthy of being compared to small luxury sedans, but unlike many smaller luxury sedans, the Cruze is far more affordable and far more efficient. The previous Chevrolet Cruze was one of GM’s bestselling sedans and with the long list of improvements, the new Cruze is likely to keep this small sedan towards the top of the list of America’s most popular new cars.