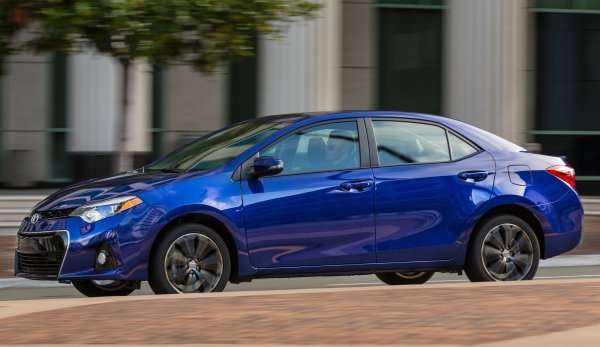 I recently spent a week driving the 2016 Toyota Corolla S Plus, which paired a premium interior spread with a manual transmissions – leading to a small sedan that is fun to drive and heavily appointed for a vehicle that costs just over $22,000.
Advertisement

The Toyota Corolla is the bestselling compact car in America and it has been at least one of the bestselling cars in that segment for a long time. Those folks who don’t care for these small sedans will be quick to label them as little more than appliances to get you to and from work, and while that may have been the case in the past – the 2016 Corolla S Plus shows just how far this segment has come. With a long list of interior features, a sporty exterior and a manual transmission mated to a peppy engine – this is not the bland, boring econobox that so many people avoid.

Pricing
What is likely the most important point of this review is that while the 2016 Toyota Corolla S Plus is much more heavily appointed than what critics would expect from a small sedan, the price remains low. My Corolla test car didn’t have any add-on options, so everything mentioned in this review is standard and the price as tested was just $22,430 (including destination).

When you consider some of the features, such as the Entune infotainment system with navigation, the sporty leather seats, push button start, automatic climate control and a backup camera, the Corolla S Plus competes with the premium trimlines from the competition and in almost every case – the $22,430 price tag of the Corolla is well below the other options in the segment.

Best of all, unlike most of the premium trimlines from the competition, the Corolla S Plus has a manual transmission – making this small sedan more fun to drive.

The Exterior
On the outside, the 2016 Toyota Corolla S Plus is not quite as aggressive as the carbon-fiber clad Corolla Furia Concept from a few years back, but there is no question that this new Corolla is far less “vanilla” in terms of exterior styling…especially in the lovely Blue Crush Metallic exterior paint.

The S Plus package includes LED headlights with LED daytime running lights in sharp, angled headlight housings. Those headlights flank a slim black upper grille and the larger gloss black lower grille opening, all of which gives this Corolla a premium, high tech look up front while the unique silver-and-black wheels and the low profile rear spoiler complete the sporty feel of the Corolla S Plus. Exterior styling comes down to a matter of opinion, but after Toyota has been criticized for ages for their vehicles being too bland on the outside – the Corolla S Plus is a sharp-looking, sporty, compact sedan.

The Interior
The exterior design of the 2016 Toyota Corolla S Plus is a nice improvement over the bland econoboxes of yesteryear, but the cabin of this Corolla is the real story here.

First up, the Corolla S Plus has lots of leather – on the door panels, the steering wheel, the shifter, the center console armrest and the front and rear seats. The rear seats have a solid leather finish while the front seats have a blue mesh center section between the deep, leather bolsters. These front seats are not as aggressive as some of the seats in more sport-minded models, but for a $22k compact sedan – these seats look great and do a solid job of keeping the driver and front passenger nestled safely in the seats during stints of spirited driving. Next, while the Corolla S Plus offers the amount of front passenger space that you would expect (and almost require for taller drivers), the back seating area is more spacious than you would expect. The rear seats aren’t as contoured as the front seat, which makes the outboard positions a bit less comfortable than the front passenger seat, but this flatter design makes the middle seating position more useful. Relative to some other small sedans which have a more heavily contoured rear seat, the Corolla will better suit someone looking to fit three people in the rear seat – although it is still a bit too tight for three adults.

Finally, the Corolla S Plus comes with an impressive spread of interior technology and the centerpiece is the Entune infotainment system with its 7 inch touchscreen. This screen allows quick and easy access to the sound system, the navigation software, the hands-free phone system, traffic and weather information, the Eco driving screen and a variety of custom Apps. While this system is touchscreen-intensive, there are a few hard buttons and knobs around the perimeter of the screen for the sound system controls, along with a few buttons on the steering wheel – which adjust the sound system, the driver information screen in the gauge cluster, the hands-free phone system and the navigation (via the voice control system). While the Corolla’s Entune infotainment system might seem fairly involved at first, I find that this system is actually simpler and more user-friendly than some other systems on today’s market. The on-screen buttons are big and easy to hit while driving and the collection of buttons and knobs make on-the-fly adjustments to the radio or navigation quick and easy. This system has everything that you want, but you won’t need to take classes at the dealership to change the radio station or to set up the navigation.

Also, while the climate control system isn’t integrated into the infotainment system, it is easily accessed via the dedicated panel below the touchscreen, allowing easy adjustments without having to hunt around the touchscreen menu. Compared to the auto industry as a whole, the cabin of the 2016 Toyota Corolla S Plus isn’t mind blowing. In fact, much of what my Corolla test car had inside is practically expected by many drivers in newer vehicles, but as the compact sedan segment goes – the Corolla S Plus packs a premium feel with a not-so-premium price.

The Drive
My Toyota Corolla S Plus test car had a great many premium features, but it had one key component that you cannot get with a heavily appointed compact from most other automakers – a manual transmission. With vehicles like the Ford Focus, the Chevrolet Cruze or the Hyundai Elantra, if you want interior goodies like leather seats and a premium infotainment system with navigation, you are “stuck” with an automatic transmission. To many people, this doesn’t matter, as many people cant drive a manual transmission anyway, but for those of who are coordinated enough for the third pedal – the Corolla offers the advantages of a stick shift in a high end trimline. Shifting aside, the Toyota Corolla S Plus is a comfortable, fun little car to drive for short, daily trips or a longer road trip. The suspension is sporty enough that you can enjoy a spirited drive down a twisty country road, but more importantly, the Corolla S Plus offers a nice, smooth ride on Detroit’s rough highways. Realistically, more buyers and drivers of the Corolla will care more about ride quality, so this small sedan will satisfy that demand – but for those who want a car that is fun to drive, this Toyota checks that box as well. Finally, my Toyota Corolla S Plus turned in solid fuel economy numbers during my time behind the wheel. The EPA expects that the manual transmission models will return figures of 28mpg in the city, 37 on the highway and 31 combined – all of which I found to be very reasonable estimates. When I spent more time in numerically lower gears (such as when driving the Corolla a little harder, keeping the RPMs higher), my mileage over a tank of fuel dropped under 30mpg, but when I drove the car more reasonably and spend a bit more time on the highway, my average over a tank rose to slightly above 31mpg. Also, while on a longer highway run, I found that it didn’t take much work to see 40mpg, so someone who spends much of their drive time on the highway – especially if they stay below 70mph – will likely be able to beat that 31mpg figure on a tank of gas.

The Toyota Corolla S Plus is not a performance sedan by any stretch, but the manual transmission makes this car more fun to drive without compromising the daily driving comforts – with a smooth ride and solid fuel economy.

The Final Word
There is a reason that the Toyota Corolla is the bestselling compact sedan in America, and it doesn’t take long to see how the features of the S Plus package have helped to keep Corolla sales strong. This trimline has a sporty, high tech exterior, a cabin filled with premium features including leather seats and an advanced infotainment system and a drivetrain that makes this little sedan fuel efficient and fun to drive. There are plenty of small sedans sold in the US which check all of the same boxes as the Toyota Corolla S Plus, but very few do it as affordably and even fewer offered the fun of a manual transmission with a premium trimline. If you are looking for a roomy, small sedan with all of the “essential” premium interior features, lots of passenger space, a manual transmission and a price far below that of comparably equipped models – the Corolla S Plus is one of the best bargains in the popular compact segment.