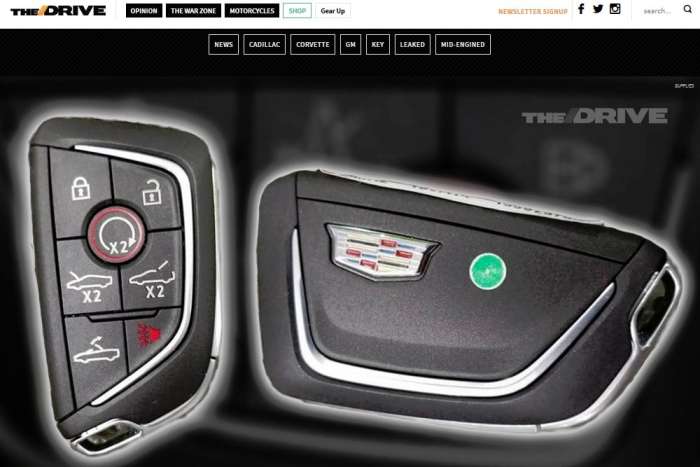 If this key fob proves to be real, General Motors is working on a Cadillac based on the upcoming mid-engine Corvette and based on what we can see in the pictures, it definitely looks to be real.
Advertisement

The folks at The Drive were recently sent a series of pictures of a key fob that they believe – and we agree – that could belong to a mid-engine Cadillac convertible that is based on the long-rumored mid-engine Corvette. General Motors has never recognized the existence of a mid-engine sports car project, but there are so many spy shots of the mysterious midship machine working out on public roads that there is no question that the company is working on some sort of mid-engine supercar.

Most people expect that it will be called the Zora and it will usher in a new era of Corvette performance, but based on these images, there could be a Cadillac based on the same architecture.

Mid-Engine Cadillac Key Fob
As you can see in the image above (click here for a closer look at The Drive), one side of this key fob has the modern Cadillac crest and the other side has an array of buttons. There are lock and unlock buttons, a remote start button and a panic button, none of which are anything special, but there are three buttons that make this story so interesting.

First, there is a button at the bottom left that clearly shows a convertible top retracting. More importantly, there are buttons to pop open the hood and the trunk, but there is no question that the silhouette car on those three buttons have a proper midship form. If that is the case, the “hood” button would open the front cargo area while the rear “trunk” button would reveal the high performance engine.

Of course, we should point out that these images don’t guarantee anything. Yes, this fob could signal an upcoming mid-engine Cadillac sports car, but there are other possibilities. This could be a Corvette key fob with a Cadillac crest to lead us down the wrong track or it could be a fob for an upcoming concept car or some other non-production vehicle.

However, this is our first good hint that a mid-engine Cadillac based on the C8 Corvette could be on the way as well.

DeanMcManis wrote on November 9, 2018 - 4:25pm Permalink
Cadillac has had a good history of building upmarket models of Chevy designs from the CTS-V to the Escalade. And there is good evidence, from the XLR-V to the Cien concept that Cadillac always wanted to offer a premium sports car, and a mid engine supercar as a halo car for the brand. Cadillac clearly wants buyers to compare their cars to those from Mercedes, Audi, BMW and Porsche, but they never succeeded in offering vehicles that compete against cars like the Boxster or Cayenne, or something like the Porsche 911 Turbo, let alone mid-engined exotics like Ferrari or Lamborghini. But the new mid-engined Corvette would be a perfect platform for Cadillac to build a mid engined luxury/performance car on. Especially considering that Cadillac has announced that they are killing off the cool CTS-V and ATS-V, which for me are the most compelling cars in Cadillac line-up today. So I really hope that this clue and rumor is true.