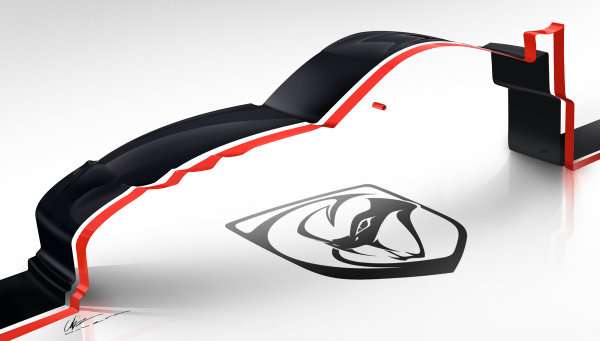 Among the many high performance cars being unveiled at next month’s SEMA Show in Las Vegas will be the new Dodge Viper ACR Concept and while we don’t know anything about this new Viper ACR - it could lead to one of the best performing production cars in the world.
Advertisement

Among the collection of teaser images issued by the Chrysler Group pertaining to the upcoming SEMA Show in Las Vegas is the image shown above. While it doesn’t actually show a car, the shape of the stripes and the Stryker logo make it very clear that this is a scant preview of a new Dodge Viper. To be specific, this is the first teaser of the new Viper ACR Concept and while we know nothing about this concept (including what it might look like), we can use Vipers from the past to guess as to what we can expect from the SEMA-bound Viper ACR Concept.

The American Club Racer
If you were sure, ACR stands for American Club Racer and in the recent history of the Dodge brand, both the Dodge Viper and the Dodge Neon SRT4 have both been offered in ACR form. As the name might suggest, the ACR package is designed to be a supreme track car while maintaining the basic necessities of a street legal car. The 2010 Dodge Viper SRT10 ACR is by far the most well known American Club Racer from Dodge, as it set lap records at tracks around the world - from the German Nurburgring to Laguna Seca in California. The 2010 Viper ACR was arguably the most track capable road car ever produced by an American automaker and at the time, no other street legal production car in the world could keep up with the specially equipped Viper on most of the world’s road courses.

The 2010 Dodge Viper SRT10 ACR relied on the same basic drive train as the non-ACR models, but the SRT engineers equipped the 2010 Viper road racer with a collection of upgrades that made it nearly unbeatable on most tracks with turns. In addition to the aerodynamic upgrades that included a massive rear wing, front dive planes and a super aggressive chin spoiler, the Viper ACR back in 2010 packed a uniquely tuned and fully adjustable KW suspension setup, a big StopTech braking package, lightweiight Sidewinder wheels and Michelin Pilot Sport Cup tires. There was also a “hardcore package” that shaved some extra weight from the Viper ACR and even though there was no significant power increase, the older Viper ACR blasted around the world’s most grueling road courses faster than any factory production road car before it.

The 2010 Dodge Viper ACR became a performance legend but with the new Viper, there has been no mention of an ultra track ready ACR model - until now.

The Dodge Viper ACR Concept
From the image above, there are a few things that we can surmise about the new Dodge Viper ACR Concept. First off, if will almost certainly be white with a thick black strip and a thinner red “driver’s stripe”. It also looks as though the red driver’s stripe will continue into the cockpit with a splash of red on what I believe to be the upper potion of the steering wheel. It also appears as though the Viper ACR Concept will wear a huge rear spoiler and perhaps an aggressive chin spoiler, based on the shape of the stripes in the image above. It also looks like the new ACR might have some unique sculpting on the hood, but that is tough to tell from this first teaser. Basically, I expect the new ACR to look like a more extreme version of the modern Dodge Viper TA 2.0.

What we cannot see is what kinds of real performance upgrades will be made to the Dodge Viper ACR Concept. Based on the 2010 models, I fully expect to see a suspension setup and a braking system that will yield better performance numbers than any past Viper; with the help of some lightweight wheels and some super sticky street legal tires. I also expect that the ACR Concept will be the lightest of the modern Vipers, doing away with the luxury goodies like the plush leather seats and the state of the art infotainment system to curb all unnecessary pounds from the track ready supercar.

Will the Viper ACR Concept Become a Production Car?
Im sure that every reader out there is wondering if the new Dodge Viper ACR Concept from the SEMA Show could evolve into a new production road car. I believe very strongly that we will see a new Viper ACR in the coming years, presumably replacing the Viper TA as the top choice for those prospective owners who only really care about going as fast as possible.

The 2014 SEMA Show starts in early November so we will have to wait a few weeks, but my guess is that the 2015 Dodge Viper ACR Concept will both be worth the wait - and it will also set a new standard for American supercars.