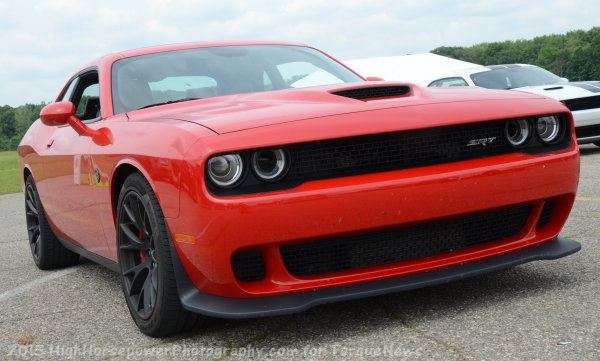 Based on the recent news that the Dodge brand is planning to substantially increase production of the Hellcat Hemi in 2016, it is very realistic to believe that the company could sell upwards of 10,000 examples of the 707 horsepower Challenger and Charger.
Advertisement

In a piece from earlier this week in Automotive News, Dodge brand CEO Tim Kuniskis stated that the company has already sold 4,000 Challengers and Chargers this year with the 707 horsepower Hellcat Hemi. He also explained that the company is continuing to build the Hellcat Challenger and Hellcat Charger as they work through the massive backlog of orders from the first few months of this year, so the final number of 2015 Hellcat models built should comfortably reach 5,000 units this year.

Finally, the Dodge boss stated that they are planning to build substantially more Hellcat engines in 2016, leading me to believe that they will sell at least a comparable number of Hellcat Challengers and Chargers in 2016, so it seems very realistic to believe that there will be more than 12,000 Hellcat Challengers and Chargers sold during the first two model years of the legendary muscle car and sport sedan.

2015 Production Estimates
Other than a single day in the middle of June, the Chrysler Group hasn’t accepted new orders for the Hellcat Challenger or Hellcat Charger for months. The decision to close the order banks for both of the Hellcat cars came after the company allegedly received more than 9,000 orders for the Challenger or Charger with the 707 horsepower supercharged Hemi. Around the time that the order banks were closed, there was a recall of the cars with the Hellcat Hemi engine to fix a fuel line issue and at that point, just north of 2,200 vehicles had been built and delivered.

That recall came in early March, so we knew that after the first two months of the year and the final few months of 2014 when production was first ramping up, so we know that in the first six or so months of production, the company built and sold 2,211 units. Based on Kuniskis’ comments with Automotive News, we know that another 1,800 or so Hellcat cars have been sold between that early March recall and now, so over the past four months, the company has built (or at least delivered) around 450 Hellcat cars per month.

Even though Chrysler has allegedly received more than 9,000 orders for the 2015 model year Challenger and Charger, it seems unlikely that the rate of 450 Hellcat cars per month would continue throughout the rest of the year. At that rate, we would see another 2,700 Challengers and Chargers built with the 707 horsepower engine and that would add up to almost 7,000 Hellcat cars in 2015. That seems unlikely based on the fact that the company has already been forced to increase production plans twice this year, but even at a rate of 300 Hellcat cars per month – we could see close to 6,000 Hellcat Challengers and Chargers built and delivered during the 2015 calendar year. However, for the sake of discussion, we can expect to see at least 5,000 Hellcat cars sold in 2015.

That is 12,000 examples of the Dodge Challenger and Dodge Charger with a 707 horsepower supercharged V8 – a package which critics didn’t believe would sell very well.