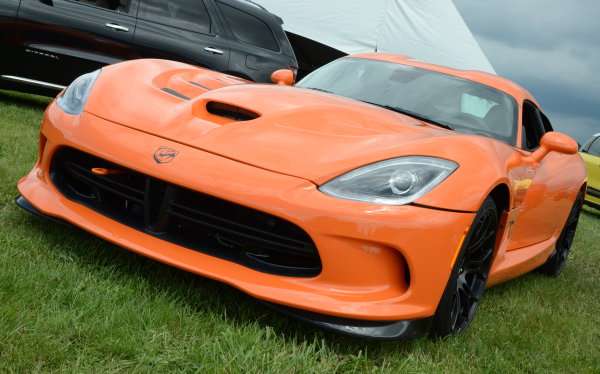 The Chrysler Group has announced a recall of select 2013 and 2014 SRT/Dodge Viper supercars over a concern that the driver’s airbag system may not be calibrated correctly and should there be an accident, this problem could lead to the airbag system not working as it should and that increases the likelihood of an injury.
Advertisement

The 2013 SRT Viper and 2014 SRT/Dodge are being recalled by the Chrysler Group over a concern that the driver’s side airbag system may not properly gauge how far the driver is from the steering wheel. This could lead to the airbags not deploying correctly during an accident and that increases the chances of the driver sustaining an injury. Needless to say, that creates a safety risk for owners, especially in a car that is designed to be driven as fast as the modern Viper.

Although there have not been any injuries stemming from this problem nor have there been reports of an airbag in the Dodge Viper not deploying correctly, the simple fact that the airbags could fail to function correctly is enough for the company to recall those models involved.

The Vehicles Included
This recall pertains specifically to all 2013 SRT Viper and 2014 Dodge Viper models manufactured between November 28, 2012, and June 26, 2014. In total, there are 1,912 Viper coupes included in this recall with 1,624 in the United States, 201 in Canada, 16 in Mexico and 71 vehicles located in other markets around the world.

The Culprit
The problem causing this Dodge Viper recall is actually a small sensor that monitors the position of the driver’s seat. The Viper airbag system uses a sensor to determine the position of the seat in order to tell the airbag how hard to open in the event of a collision. If the sensor is not offering the proper readout, the airbag might not open hard enough to properly cushion the blow to the driver’s head in a crash. I have to wonder if it could also open harder than it is supposed to, which would smash the driver in the face even harder. In any case, these airbags may not be working right to Dodge is getting these Vipers back to check the position of the sensor.

The Inspection and the Fix
Fortunately, the process of repairing this seat position sensor in the Dodge Viper is a simple one. The dealership technician will check the sensor position and if the something is awry, a small metal shim will be inserted to insure that the airbags are receiving the proper information pertaining to the seat position. The recall is expected to formally begin on or around October 24th and owners who are concerned can call the Chrysler customer service line at 1-800-853-1403 with reference to Chrysler recall number P52.

Ultimately, this recall doesn’t pose a risk just by driving the car, but in the event of an accident there is that chance that your Vipers airbag won’t open correctly so if you own one of these recalled cars – it is a wise move to accept the free work.