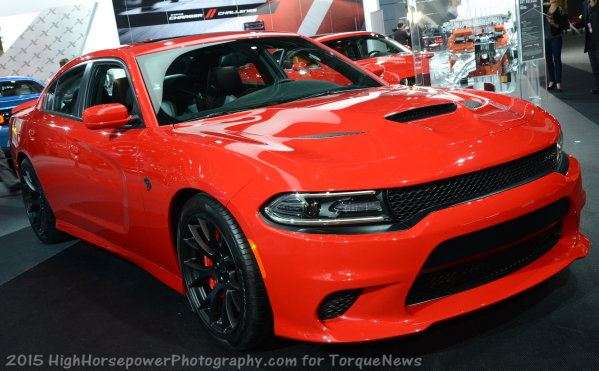 The 2015 Dodge Challenger and Dodge Charger powered by the 707 horsepower Hellcat Hemi remain locked out of the order banks at dealerships around the country, but in an effort to meet the crazy high demand of these record-setting muscle cars, Dodge has ordered 1,000 examples of the supercharged Hemi to be built – although it is unclear what number that 1,000 is being added to.
Advertisement

Since the 2015 Dodge Challenger SRT Hellcat and 2015 Dodge Charger SRT Hellcat were introduced last year, the Chrysler Group has insisted that they weren’t going to cap production. When I spoke with Tim Kuniskis at the Woodward Dream Cruise debut of the 707 horsepower Charger, the Dodge boss stated very clearly that the limited production numbers were unfounded and that the company would build as many Hellcat Chargers and Challenger as they could sell.

The problem that has come up is that while the automaker is building the Hellcat-powered Charger and Challenger as quickly as possible, the demand is far exceeding the available supply. This has led to long backlogs with both dealerships and buyers who have already made deposits, and to help work through the orders already placed, the company has stopped taking new orders from dealerships around the country.

Fortunately, some big news surfaced from an unnamed source who spoke with the folks from Hellcat.org. Evidently, the Dodge brand has ordered 1,000 more Hellcat Hemi engines built and those 707 horsepower engines are being installed in engines as quickly as the company can get them into cars at the Brampton Assembly Plant.

1,000 More Hellcat Hemi V8s
This information from Hellcat.org makes it clear that Dodge is building at least 1,000 more examples of the 2015 Charger and Challenger with the most powerful American production engine of all time. The problem is that we don’t know what that 1,000 is being added to – nor do we know if that extra thousand will put the company anywhere near meeting all of the early demand for these powerful muscle cars.

Early on, there were rumors that Chrysler had expected to sell around 5,000 examples of the Challenger and Charger with the Hellcat Hemi engine, but that number was never confirmed by the company. When you are talking about a pair of cars with 707 horsepower and price tags starting over $60k, 5,000 seems like a nice estimate, so when Chrysler planned to build up to 5,000 Hellcat engines, it seemed like a safe bet. Heck, some skeptics insisted that the company would be stuck with cars that they couldn’t sell. After all, the Dodge Viper hasn’t sold well, so would people really buy a $65,000 Charger? Some said no – and those people were all very wrong.

The company hasn’t announced any official numbers, but rumors indicate that over 9,000 Hellcat Charger and Challenger models have been ordered, so if the Chrysler Group had originally planned to build 5,000 supercharged Hemi engines for 2015, an extra thousand is still going to leave a great many buyers empty handed.

While it is still unknown how many Hellcat cars Dodge will build and sell for 2015, we know that at least a thousand more of those folks who are patiently waiting for a car that they pre-ordered could have their Mopar muscle car in their driveway in time for summer.