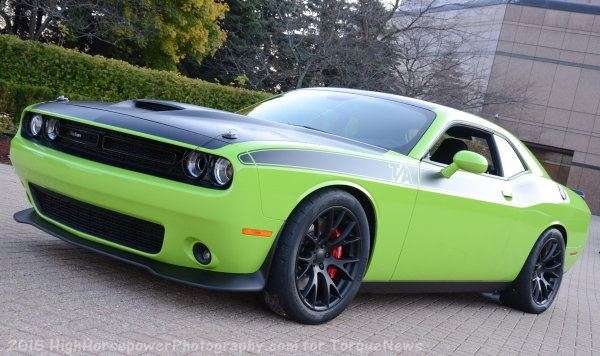 Now that the 2015 Dodge Challenger Hellcat has proven itself as the most powerful muscle car in the world, the only true gap in the Dodge lineup is a Challenger TA inspired by the Viper TA and powered by the Hellcat Hemi – which would be ideal for the prospective Mopar muscle car buyer who wants high performance without the luxury goodies.
Advertisement

While older Mopar fans might recognize the TA logo from the Challenger Trans Am models from 1970, but when the Chrysler Group reincarnated the TA name for the modern Dodge Viper, it became the Time Attack. The Viper TA does without items that increase the curb weight and the price, focusing more on high performance than the Viper GTS, which adds a hefty dose of luxury – and weight - to the Mopar supercar.

Unfortunately, as awesome as the 2015 Dodge Challenger SRT Hellcat is in every way, it is expensive and it is heavy, and the long list of standard interior amenities is why the Hellcat is so expensive and so heavy. As was the case with the previous Dodge Challenger SRT, buyers want a car with the same performance goodies, but less luxury items which drive up the curb weight and MSRP. Just like the Viper TA, the Challenger TA could be more of a track focused sports car that still offers plenty of daily drivability.

Imagining a Proper Challenger TA
The Dodge Viper TA is the ultimate performance package for the modern Viper lineup, featuring all of the features of the model line that make it such a great performance car, but few of the features that don’t improve performance in any way. This also helps to keep the price below the Viper GTS, so it is a bit more of a budget supercar. While Dodge wanted to make the Viper more luxurious, buyers wanted something that focused more on performance and less on comfort – and the Viper TA was the answer.

In the same way, there are prospective buyers for the 2015 Dodge Challenger SRT Hellcat who want a new Mopar muscle car with the 707 horsepower supercharged Hemi, the heavy duty transmission, the sport steering package, the race-ready suspension and the 15.4” Brembo brakes – but they don’t want leather wrapped, heated and cooler power seats, a high end infotainment package with a dozen speakers and tons of interior insulation that helps improve drivability on a daily basis. None of that leather or interior technology is needed by a driver who only cares about going fast, so there are plenty of buyers who would be happy with cloth, manual seats, a normal analog gauge cluster, a simple radio head unit with buttons and knobs and less insulation in the body.

Removing all of this stuff from the Challenger SRT Hellcat would remove weight and it would also bring the cost down, so while the 707hp Mopar muscle car is a crazy bargain at $59,995, removing those nonessential luxury items would get the price down even further. Making it lighter would allow it to handle better, while also making it quicker in the quarter mile and on the top speed test track.

The More Likely Challenger TA
After seeing the Challenger TA Concept from the 2014 SEMA Show, it seems that there is a chance that we could see a Time Attack Challenger, but it likely wont have a Hellcat Hemi. Right now, the Hellcat Hemi is in such high demand, that Chrysler will almost surely not offer up a newer, less expensive version of the SRT Hellcat package. The 392 cubic inch Hemi from the R/T Scat Pack and SRT 392 Challengers was in the SEMA concept, and it seems the more likely choice for a production Challenger TA. The good news about that direction is that the 392 Hemi weighs even less than the Hellcat Hemi, and using the 392 instead of the Hellcat Hemi wouldn’t cost nearly as much.

Obviously, using the 392 Hemi in a future Challenger TA wouldn’t pack as much punch, so if Dodge wants to come up with a factory muscle car that will appeal to those folks who want Hellcat power without the luxury of the SRT Hellcat package – a 707hp Challenger TA could be the next step in the evolution of the modern Dodge muscle car.

Ford has the Shelby GT350 Mustang, Chevrolet has the Camaro Z28, Dodge needs a Challenger TA that will battle with the other no-fuss packages from the crosstown rivals.

Auto Motive wrote on February 21, 2015 - 4:46pm Permalink
Not going to happen especially in the next two model years. FCA will be re-designing both the charger and challenger hopefully getting rid of 1000 lbs in the process. The new cars should be the badest muscle cars in the segment with the hellcat leading the charge. My daughter has a 392 Challenger and I can tell you its a beast in a straight line with 470 hp. My future hellcat for 2016 will be the Charger and my grandkids will be cruising with me and my wife to local cruises, the drag strip and a lap of PA. 4 doors and a 11 second machine. Incredible.,