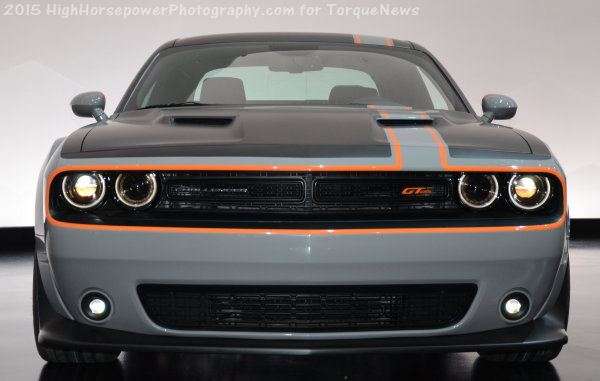 For just the second time since the 2010 Chevrolet Camaro was introduced, the Dodge Challenger sold more units in the course of a month – beating the GM muscle car by 120 units and building on what is already the best year for the modern Mopar muscle car.
Advertisement

Dodge Challenger sales dipped to their lowest point during the 2015 campaign in September with just 4,552 units sold, but the brawny Mopar muscle car bounced back in October with 5,409 new Challengers delivered. Also in October, General Motors sold just 5,289 examples of the Chevrolet Camaro, allowing the Challenger to beat the Camaro in monthly sales for just the second time since the sporty Chevy returned in 2009.

October Challenger Sales
With 5,409 new Challengers sold last month, October was the 5th best month of 2015 for the Dodge muscle car. That figure accounts for a 31% improvement from the 4,140 Challengers sold in that same month one year earlier and the growth of the Challenger helped the Chrysler Group to continue their incredible streak of 67 straight months of positive sales growth.

Through the first 10 months of the year, the Chrysler Group has sold 57,358 examples of the Dodge Challenger from both the 2015 and 2016 model year. The arrival of the 2016 models last month likely led to the strong October sales numbers and with people still waiting to get their hands on the Challenger in both Scat Pack and Hellcat form, we are likely to see the Challenger sales numbers staying strong through November and December.

At this point, 2015 is already a record year for the modern Dodge Challenger, with the previous best coming in 2014 when Dodge sold 51,611 Challenger coupes, so from here on out, all of these sales through the final quarter of 2015 are only building on a record.

Beating the Camaro
While beating the Camaro in October 2015 sales and claiming the second spot in the muscle car sales race for the second time this year (and the second time ever) serves as a nice feather in Dodge’s cap, it should be noted that Camaro sales in October 2015 were the second worst of any month this year. The 2016 Camaro began reaching dealerships and new owners this past weekend and in anticipation of both the 6th generation models and the expected discounts on the 2015 models – prospective Camaro buyers have been holding off.

Now that the 2016 Chevrolet Camaro is reaching dealerships around the country, we can expect to see a big spike in Camaro sales over the final two months of 2015 and into 2016, but for the time being, the Dodge Challenger is once again the second bestselling muscle car over the course of a month.

LG's New EV Battery Plant Is a Welcome News for Tesla
Tesla Giga Berlin's New Hurdle: It's Not Only the Gov't, but Now Tesla Itself
END_OF_DOCUMENT_TOKEN_TO_BE_REPLACED