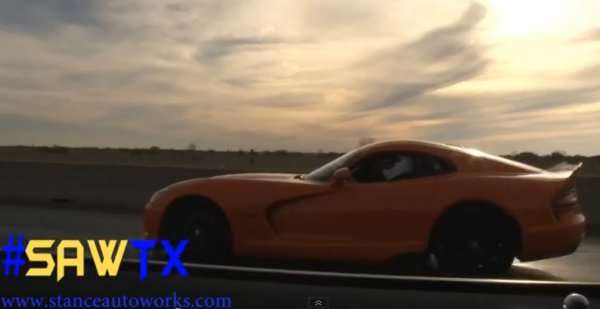 Dodge Challenger Hellcat Takes Down a Viper TA from a Roll

We have seen the Dodge Challenger SRT Hellcat and the Dodge Viper TA both beat the new 2015 Chevrolet Corvette Z06 on a high speed run and today, we have a video showing the two Mopar monsters going head to head in a rolling race.
Advertisement

Mopar Monsters Go Head to Head
Unlike the previous videos showing both the Hellcat Challenger and the new Viper TA beating up on the 2015 Corvette Z06 coupe, this roll race takes place on a drag strip. The cars pull to the starting line, pause, and the leave the line hard, but not wide open like they would in a normal quarter mile drag race. Instead, they climb to some unspecified speed, one of the cars gives three honks of the horn, and both cars go wide open.

At first, the Viper noses slightly ahead, but the 707hp Challenger quickly draws even and begins to pull ahead. The Viper manages to stay a fender or so back of the muscle car until the driver of the supercar misses a shift for a split second – and that puts the Viper far enough back that the race is over.

The video ends by showing the same roll race between the Hellcat Challenger and the 2015 Viper TA from the outside of the Challenger, giving us one more perspective from which to enjoy this race featuring 1,352 Mopar horsepower.

While this certainly isn’t the best race video due to the fact that the Viper driver missed a gear at a point where the aerodynamics of the supercar might have helped it overcome with power difference, there is no question that it is great to see the two most powerful Chrysler Group production cars to date going head to head. While there is some wind noise, this video has some great sound clips of the supercharged V8 and the naturally aspirated V10 roaring as these Detroit beasts clash so crank up your speakers and enjoy!

Mark Day wrote on January 22, 2015 - 7:07pm Permalink
If you want to go fast get an automatic. It's getting to be "no contest" with the new sophisticated automatics. Disappointing that one isn't offered in a Viper.