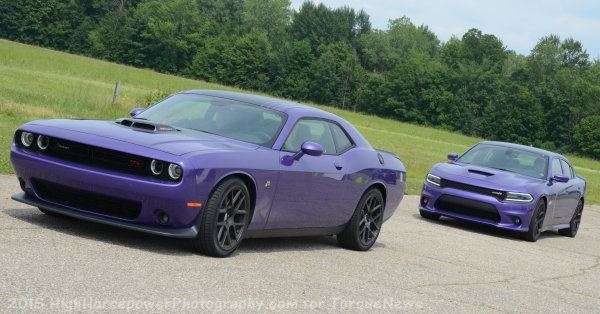 The Dodge Challenger, Charger Get Plum Crazy in 2016

The Chrysler Group has just announced the first piece of information on the 2016 Dodge Charger and 2016 Dodge Challenger including pictures of the latest high impact color – the triumphant return of Plum Crazy purple.
Advertisement

In the history of Mopar muscle cars dating back to the 1960s, few colors have gathered a bigger following in the collector’s world than Plum Crazy. The Chrysler Group back in the 1970s had a massive array of bright, eye-catching colors and while the number of bright colors has waned in the modern years, the Dodge brand has done a great job over the past decade of reintroducing the popular colors of the original muscle car era on their modern performance cars.

During the 2015 model year, the Dodge Challenger and Charger were available in three high impact “heritage colors” including B5 Blue, Sublime (green) and TorRed. In past years, we have seen Hemi Orange, Go Mango, Top Banana, Green with Envy, Stinger Yellow, Detonator Yellow and Furious Fuchsia – among others – but one of the most popular colors during the 2007, 2010, 2013 and 2014 model years was Plum Crazy.

When the 2015 Dodge Challenger was introduced with a 1971-esque look and the new Scat Pack trimline, some Mopar faithful were disappointed that Plum Crazy wasn’t present in the color palate. Fortunately, Sublime and B5 Blue did a fine job of filling the needs of the old school fans, but for the 2016 model year – Plum Crazy is back.

“Powerful muscle cars painted in impactful colors make Woodward Dream Cruise the perfect setting for Dodge to debut the newest generation Challenger and Charger models in Plum Crazy,” said Tim Kuniskis, President and Chief Executive Officer – Dodge Brand and SRT Brand, FCA – North America. “And with our strongest muscle-car arsenal ever, we knew it was time to reach into our Dodge paint code archive and offer our high-performance R/T Scat Pack and SRT Hellcat models in one of the most iconic exterior colors of all time.”

In other words, while availability varied by year, Plum Crazy was offered in limited numbers in 2007, 2010, 2013 and 2014. However, that changes for the 2016 model year, with the deep metallic purple hue being offered on nearly every trimline.

If you are buying a 2016 Dodge Challenger in SXT Plus, R/T, R/T Plus, R/T Classic, R/T Shaker and R/T Shaker Plus, R/T Scat Pack, 392 HEMI Scat Pack Shaker, SRT 392 or SRT Hellcat form – you can get Plum Crazy. This leaves just the base SXT Challenger without the new high impact color.

If you are buying a 2016 Dodge Charger in SXT, R/T, R/T Road & Track, R/T Scat Pack, SRT 392 or SRT Hellcat form, you can opt for Plum Crazy – leaving only the base SE package without the option.

Availability Beginning in September
Plum Crazy will hit the order banks for the 2016 Dodge Challenger and Charger in September for 2016 “sold orders”, meaning that those people ordering cars from the first batch of the 2016 model year muscle cars. Then, starting in October and through the end of the 2015 calendar year, dealer orders for any of the packages mentioned above can add Plum Crazy. Plum Crazy won’t be available for order after the end of the year, but I would expect to see plenty of Dodge dealerships filling their inventory with Plum Crazy muscle cars so even if you don’t order a 2016 Challenger or Charger in September, you could still score one of these gorgeous purple muscle cars.

I have had the pleasure of driving the 2016 Charger SRT 392 and Challenger Scat Pack Shaker in Plum Crazy and while the drive impressions are under embargo for a few more weeks, I can say that Plum Crazy fits the current Charger and Challenger very well. This color looks fantastic on the high performance Dodge muscle cars and I suspect that Plum Crazy will sell very well in the new model year.

Those folks who attend the 2015 Woodward Dream Cruise this Saturday will get to check out the 2016 Charger and Challenger in Plum Crazy, in addition to a great many other awesome modern and classic Mopar muscle cars and trucks.

Tesla Contemplates A New Strategy for China Retail even As Sales Boom
Jay Leno on Elon Musk & EVs: “I Think He Should Get ... Credit"
END_OF_DOCUMENT_TOKEN_TO_BE_REPLACED