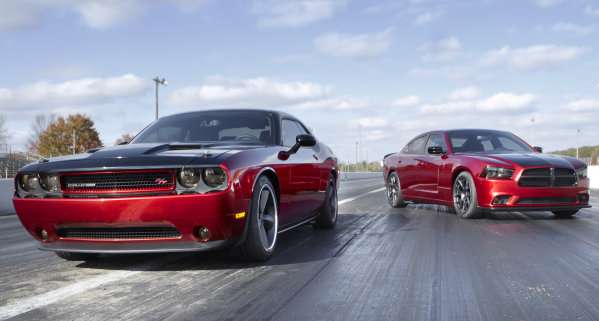 The Chrysler Group has announced a new lease plan for the 2014 and 2015 Dodge Charger and Dodge Challenger that should help spur sales to both Dodge muscle cars for the current model year and the next – including a 1-year lease deal that is unlike anything in the American auto industry today.
Advertisement

"If you have your eye on a new Challenger or Charger, there's no need to wait for the new models to arrive," said Tim Kuniskis, Dodge Brand President and CEO, Chrysler Group LLC. "The Dodge Double-Up program lets you drive today's Charger or Challenger and trade to the 2015 with no increase in payment. This is our way of thanking our loyal Charger and Challenger customers, and extending this offer to any new customers longing to get into one of these iconic muscle cars."

Unfortunately, the Chrysler Double Up leasing program does not apply to the SRT versions of the Dodge Charger or Dodge Challenger or the base model Charger SE, but those folks who are after the SXT or RT versions of these two sporty Dodge brawlers can hook themselves up with two new cars over the course of the next year for one low monthly rate. That’s an awesome deal. Also, anyone who gets into the Double Up lease program with a 2014 model year Charger or Challenger, can switch to the other vehicle for the 2015 model year so if you start with a Challenger in 2014 and your wife has twins in 10 months, you can swap to the Charger for 2015. If you are an older buyer who gets into a Charger R/T in 2014 and your son goes away to college next fall, you can opt for the 2015 Challenger R/T. Finally, anyone who decides to purchase the 2015 Charger or Challenger after the three year lease is up will get a discount of $1,000 off of the normal buyout price.

The one key stipulation is that you are required to lease through Chrysler Capital for financing while getting both cars (2014 and 2015) from the same dealership.

Again, this program begins on April 17th – the day that the new 2015 Dodge Charger and Dodge Challenger are introduced at the New York International Auto Show. Beginning on Friday, those folks interested in leasing a 2014 Charger or Challenger for a year and then a 2015 model for three years can visit their local Dodge dealership for more information. This program will run through the end of August 2014 so if you are going to get in on this program, you have about 4 and a half months.