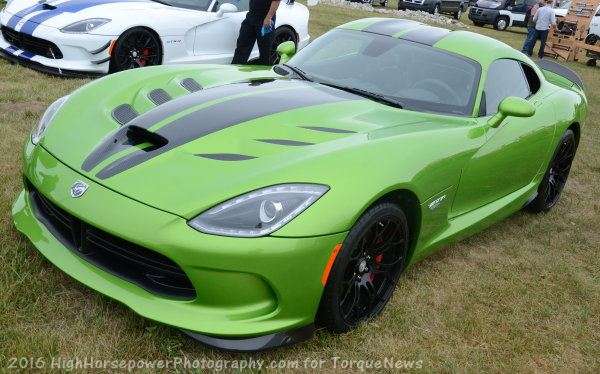 After the first 5 special edition packages for the 2017 Dodge Viper sold out within a few days of going on sales, FCA has cooked up one more special edition American Club Racer which will seemingly cap off the spread of limited edition final-year Vipers.
Advertisement

Back on June 21s, we brought you the official news that the Dodge Viper would come to an end after the 2017 model year, but to celebrate the legacy of the ultimate American supercar, FCA announced that they would offer 5 special edition packages for the final year of the Viper. That list of special edition Vipers included a package to commemorate the Viper GTS-R race cars, a package to commemorate the record setting lap at Laguna Seca, a package to relive the popularity of the VooDoo Viper, a package to relive the popularity of the Snakeskin Edition Viper and a dealer package which will only be sold at the two most successful dealerships in terms of Viper sales – Roanoke Dodge and Tomball Dodge. You can get the full rundown on each of these models from our prior article by clicking here.

All said and done, FCA planned to build a total of 206 examples of those 5 special edition Dodge Viper packages and while I expected that they would sell out in a hurry, some skeptics felt that these high priced, low production units would fail to fly off of the shelves since essentially every new Viper has the possibility to be truly unique. Under the new GTC program, buyers can guarantee that their custom ordered Viper is 1-of-1, so critics of these packages insisted that a car that was 1-of-28 or 1-of 100 wouldn’t be as popular as the custom designed models.

Well, the skeptics were wrong and I was right, as the first 5 special edition 2017 Dodge Viper packages all sold out in less than a week. In fact, the 28 examples of the 1:28 Viper ACR sold out in less than 40 minutes from the time when they first officially went on sale while the 31 examples of the VooDoo II Edition Viper ACR sold out in a little under 2 hours. The Snakeskin Edition GTC (25 units) and the GTS-R Commemorative Viper ACR (100 units) each sold out in around 2 days and the dealer edition models (22 units) – which were only available at those dealerships in Texas and Virginia – sold out in 5 days.

After selling “only” around 60 Vipers a month for the past year or so, the company received orders for 206 special edition Vipers in less than 5 days – and the vast majority of those cars have a sticker price around $140,000. Needless to say, the skeptics were wrong, as the performance community rushed to buy up these special edition packages in such a fashion that the company decided to add one more special edition package to the 2017 Dodge Viper lineup in the form of the Snakeskin Edition ACR.

No images are available of the 2017 Dodge Viper Snakeskin Edition ACR, but we know that it will have the same metallic green paint and the same snakeskin patterned stripes as the GTC model shown above. Of course, the Snakeskin Edition ACR will feature all of the high performance goodies of the American Club Racer package, along with the optional Extreme Aero Package, the carbon ceramic brakes, the ACR interior, a serialized dash badge and a personalized car cover with the owner’s name above the door area of the cover.

As was the case with the original Snakeskin Viper ACR built back in 2010, only 31 examples of this 2017 Snakeskin Edition ACR will be built and the company expects these models to go on sale sometime in “mid-July”. I expect that these 31 metallic green Viper coupes will sell out on the same day that they hit the order banks, so if you are interested in buying one of the very last special edition Dodge Vipers, you should contact your local Dodge dealerships ASAP – preferably with cash in hand.

Once the 2017 Dodge Viper Snakeskin Edition ACR is sold out, the automaker will have sold 237 Vipers in the span of about a month (not including any regular production models sold during that same timeframe), after selling only 298 Vipers during the first half of 2016. Thanks to the strong sales of the special edition packages, 2016 will almost surely be the best sales year for the current generation of the Viper, provided that the company can top the 760 Vipers sold in 2014.