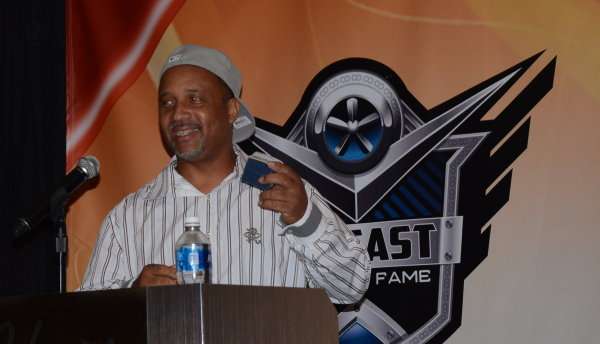 This past weekend, the Diecast Hall of Fame held their annual induction ceremony at Super Toy Con in Las Vegas, honoring those folks who play a part in the history and the future of the diecast car world – including the late Paul Walker, Galpin Autos’ Mad Mike, Hot Wheels designer Steve Vandervate, diecast historian Joe Wiggins and well-known collector (my wife) Amanda Rall.
Advertisement

From time to time, we feature some news on the diecast car world and I have found that those articles are very popular. While the majority of our regular readers are older, many of them collect toy cars – whether they have a broad collection or one that focuses on the vehicle or vehicles they drive on the road – and the popularity of these small scale cars have made diecasts a multimillion dollar industry.

For an industry like the toy car world to thrive for decades and for the products to continue to appeal to gearheads young and old, there has to be a high level of interest, effort, enthusiasm and passion which extends from the auto industry itself to the folks responsible for making the toy cars to the folks who buy them. Each year, the Diecast Hall of Fame honors those folks who played a role in the history and the ongoing success of the toy cars that so many of us have loved since we were little kids.

The Diecast Hall of Fame dinner is a private event with tickets costing $100 per person in addition to the cost of attending the event itself and among the hundreds of people in attendance for 2016 were celebrities from around the automotive world – and some celebrities from outside of the automotive world. I was fortunate enough to be invited to attend the 2016 Hall of Fame dinner with my wife Amanda, as she was one of the inductees for the newest class, giving me a chance to meet some industry bigwigs and some of the people who have helped to make these small cars so popular.

2016 Diecast Hall of Fame Inductees in Vegas
The first person honored by the Diecast Hall of Fame was the late Paul Walker. Walker is best known for his work in the Fast and Furious movie series, which had a massive impact on the growth of the younger car enthusiast crowd in the 1990s and 2000s. Walker’s role made his unfortunately short career, but it also helped to draw new faces with different views to the car culture, leading to a similar growth in diversity among the diecast collecting world.

Before meeting his untimely death when a friend lost control of a Porsche being driven excessively fast on public roads, Paul Walker was known to be one of the nicest guys in the automotive world and he was all about giving back, so he founded his charity group Reach Out WorldWide (ROWW). This group helps areas stricken by natural disaster to recover more quickly, so in addition to being a lover of fast cars and a great action flick actor – Walker helped people well beyond the automotive world.

For everything that he did in and out of the automotive community, the Diecast Hall of Fame awarded the late Paul Walker with the Lifetime Achievement Honor.

After Walker was honored in a great video showing his work and his life behind the scenes, the emcee moved onto the next inductee – Mad Mike from Galpin Auto Sports and MTV’s Pimp My Ride (shown above). Mad Mike is an automotive customizer and having had involvement with unique diecast projects via his past television programs, the Diecast Hall of Fame inducted him in the Automotive Legends category.

In the Diecast Entrepreneurs category, the 2016 Hall of Fame inductee class included Russell Hughes (below) – CEO of Greenlight Collectables (the company which makes the Hellcat Charger that we recently featured) and Hot Wheels Newsletter editor/owner Jim Garbaczewski.
In the Diecast Designers category, Hot Wheels Designer Steve Vandervate was inducted for his work in the areas of graphic design on the Hot Wheels premium and RedLine Club cars. In the Diecast Historian’s category, author and rabid collector Joe Wiggins (below) was added for the 2016 Hall of Fame class for his work on a variety of Hot Wheels related history books. His most recent book, The Ultimate Guide to Steering Rigs, Truck Co.'s & Big Rig is available on eBay, for those interested in that area of the diecast world. Click here for a closer look. Finally, in the annual RAOK Category, the Diecast Hall of Fame added two inductees for 2016 – Tony Lask and Amanda Rall – my wife. RAOK stands for “Random Acts Of Kindness” and each year, the RAOK award recognizes collectors who go to great lengths to make the collecting world better for others.

Tony Lask helped to organize a massive donation of diecasts to help rebuild the collection of an individual who lost his entire collection in a house fire.

My wife Amanda Rall is well-known in the diecast world, building one of the largest and best-known collections of diecast cars in the world while also being one of the most active women in the industry. She regularly organizes fundraisers and giveaways on her network of diecast collecting communities, including the Facebook page M2 Machines, Auto World, GreenLight Buy Sell or Trade – the largest of its kind online. In addition to running those contests, Amanda has deep connections throughout the diecast collecting world and she has become one of the people who others come to when they need help in completing a collection. Amanda also provides some of the images posted here on TorqueNews from time to time.

Needless to say, I was mighty proud to see my wife take the stage and speak before the huge crowd about how much she enjoys her role in the industry. It was a great night and it punctuated a great 2016 SuperToyCon in Las Vegas.

Congratulations from TorqueNews to all of the inductees in the 2016 Diecast Hall of Fame inductees and congrats to the CJ Kramer and the rest of the SuperToyCon crew for putting on their biggest and best show thus far!

Tony Boy wrote on August 9, 2016 - 7:50pm Permalink
Good Job Mr. Mad Mike. I am so proud of you. You have created such wonderful things dealing with cars and your talent is so inspiring to our future minds. Keep up the great work and love your show, "Pimp My Ride". Everybody should see it on cable television. Mad Mike...you are the man!!!