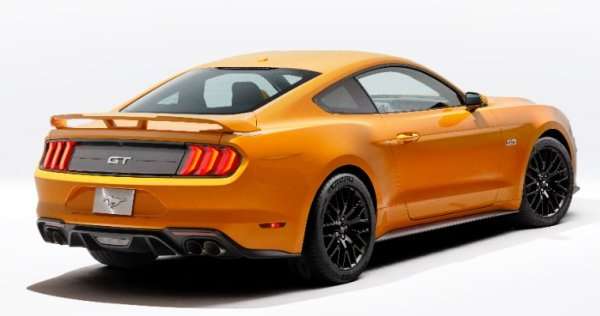 Details on the New Mechanical Bits of the 2018 Ford Mustang

We have already talked about the revised engine lineup and the new look of the 2018 Ford Mustang, but with more changes than just the end of the V6 planned for the mid-cycle refresh, here is a look at the other key mechanical changes for the 2018 Mustang.
Advertisement

During the opening week of the 2017 North American International Auto Show in Detroit, the 2018 Ford Mustang debuted with a new look and a new engine lineup, which no longer includes the base level 3.7L V6. The exterior refresh is a fairly substantial one, considering that the current Mustang has only been on the road for 3 model years, and that new look has gotten the majority of the attention.

However, when you look past the new exterior look, the 2018 Ford Mustang should offer significantly improved performance in every way.

Details are still short, but today we take a closer look at the mechanical revisions made to the 2018 Ford Mustang.

Improved Acceleration, More Sound
As we previously reported, the 2018 Ford Mustang will not be offered with the 3.7L V6 which currently serves as the base engine. The 2.3L EcoBoost 4-cylinder becomes the base engine, making the 2018 Mustang the most powerful base model Mustang by a comfortable margin. We don’t have any concrete figures, but we know that the 2018 Mustang EcoBoost models will pack more torque than the current version and in the 2018 Mustang GT, the 5.0L V8 will have more horsepower and torque.

Also, regardless of the engine chosen, the 2018 Ford Mustang can be fitted with a new active valve performance exhaust system with different settings for a louder or quieter exhaust note. On the 2018 Mustang GT, this active exhaust vents through quad tips.

Improved Handling
Perhaps the most important mechanical change for the 2018 Ford Mustang is the availability of the MagneRide suspension setup. This high tech dampening system was first introduced on the Mustang Shelby GT350R, but starting with the 2018 models, it is available on non-Shelby Mustangs as well. When combined with the unspecified chassis adjustments, the 2018 Mustang should offer improved handling over the 2017 model – which is already a great handling car.

Like the other high performance, adjustable suspension setups in the muscle car segment, Ford’s MagneRide allows you to select how aggressive you want your suspension setup to be. This lets you pick a smoother ride during normal daily driving or a stiffer ride with better cornering capabilities with the push of a button, so you end up with a Mustang that will likely ride smooth and handle better than the current models.

Finally, as part of the exterior refresh, the 2018 Ford Mustang should have better aerodynamic properties, so when this pony car hits the streets later this year, it should be superior to the 2017 models in pretty much every way.