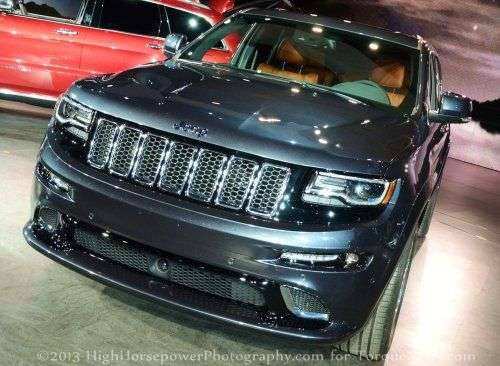 While the Detroit Auto Show debut of the 2014 Jeep Grand Cherokee lineup included gobs of information including specs on the new EcoDiesel engine, the Chrysler Group declined to announce pricing at the time of the big debut but thanks to the wonders of online enthusiast communities – we have our first look at the 2014 Grand Cherokee pricing for the engine model range.
Advertisement

The 2014 Jeep Grand Cherokee is available in five trimlines for rear wheel drive models and six trimlines for four wheel drive models with the 2014 Grand Cherokee SRT being the only trimline that is offered exclusively as a 4x4 model. The least expensive configuration for the 2014 Grand Cherokee (4x2 Laredo) carries an MSRP of $28,795 while the range topping 2014 Grand Cherokee SRT starts at $62,995 while a fully loaded GC SRT costs somewhere in the area of $73,000. These prices do not include the $995 destination charge (nor do any of the prices below) but with a spread in price that ranges from $29k to $73k – there is a little something for every prospective SUV buyer.

2014 Jeep Grand Cherokee 4x2 Pricing
As mentioned, the least expensive package for the 2014 Jeep Grand Cherokee is the Laredo models which start at $28,795 - $1,100 more than the Laredo models for the current (2013) model year. The Laredo comes standard with the 3.6L Pentastar V6 mated to the new 8-speed automatic transmission. Those who want just a little more out of their 2014 Grand Cherokee can opt for the Laredo E which is new for 2014 and starts at $30,495 - adding goodies like power seats, roof rails and Sirius Satellite radio. Like the base Laredo, the Laredo E is available only with the 3.6L V6 engine.

Finally, the top of the line rear wheel drive 2014 Jeep Grand Cherokee is the Summit model that was present at the Detroit Auto Show debut and this 4x2 premium package starts at $47,995 - $3,500 more than the 2013 Overland Summit models. The 2014 Grand Cherokee Summit comes with the standard Pentastar engine as well but this top of the line package comes with a higher price for the optional engines. The 5.7L Hemi will add $2,695 to the MSRP of the Summit models while the new diesel V6 costs $5,000. The Grand Cherokee Summit models are loaded enough that there are only a few options like the $95 engine block heater, the $995 Mopar Chrome Edition group or Exterior Appearance group and the $1,995 rear entertainment system package.

Next in line is the 2014 Jeep Grand Cherokee Overland, starting at a price of $45,995 which accounts for an increase of $2,000 from the current model year. Many of the options from the Limited models are available on the Overland except for the lower level off road adventure package (as much of that stuff is standard on this higher trimline). Also, Overland buyers can select the Quadra Drive II 4WD system that adds an electronically controlled limited slip differential package but if the buyer has already selected the box for the Off Road Adventure II package – Quadra Drive II is included.

The 2014 Jeep Grand Cherokee Summit is the top of the line in terms of the non-high performance models and when equipped with four wheel drive, the Summit carries a starting price of $50,995. This is $3,000 more than the 2013 models but in addition to the new exterior features, the 2014 model should offer better fuel economy with every engine thanks to the standard 8-speed automatic transmission. The Summit models don’t offer many options other than the engines and a few basic things like the engine block heater and the rear entertainment package.

Last and most certainly not least is the mighty 2014 Jeep Grand Cherokee SRT – a high performance SUV that starts at $62,995. This is $2,700 more than the 2013 SRT Jeep but the new interior gadgets and the 8-speed transmission are well worth the extra cost. The SRT model is the only 2014 Grand Cherokee powered by the 6.4L Hemi V8 with 470 horsepower and 465lb-ft of torque while also coming with some options that are unique to this high performance SUV. The dual panoramic sunroof, a pair of unique wheel options and the SRT high performance audio packages can take that base price up into the area of $73,000 for those who want the ultimate luxury sport utility vehicle in their fleet.

While some may grumble about the increases in price across nearly the entire lineup, I should point out that every model will now offer improved performance and improved fuel economy measures thanks to the new 8-speed automatic transmission. That, combined with the various new features and the muscular new exterior design are well worth this minute increase and in the long run – the Grand Cherokee is still the most versatile large SUV on the market today.