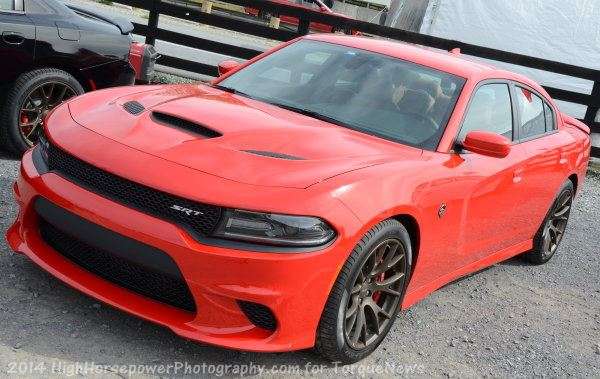 Despite the Rumors, No Manual Transmission Hellcat Charger Coming

There have been some rumors floating around the internet that the 2015 Dodge Charger SRT Hellcat would be offered with the same 6-speed manual transmission as the Hellcat Challenger, but the sad reality is that there will not be a manually shifted Charger coming anytime soon.
Advertisement

The 2015 Dodge Charger and 2015 Dodge Challenger have a great many similarities, including engine lineups, trimlines and even the basic vehicle architecture. Since being reintroduced for the 2008 model year, the Challenger has ridden on a modified version of the Charger’s sedan chassis, which is why the two share so many attributes and it is this list of similarities that has led many people online to believe and spread the rumor that the 2015 Charger would come with the same 6-speed manual transmission as the 2015 Challenger – at least in Hellcat form – but that simply isn’t going to happen for a variety of reasons.

While many people who were hoping to see a stickshift Hellcat Charger will be saddened to read this, I thought that this recent round of rumors was reason enough to explain why the Charger won’t be getting a manual transmission anytime soon – or ever.

Chassis Differences Pose the Biggest Problems
Since being introduced for the 2006 model year, the Dodge Charger has ridden on Chrysler’s LX chassis platform along with the now-gone Dodge Magnum and the Chrysler 300. When the Challenger was introduced for the 2008 model year, it was introduced on a shortened version of the LX platform, which was named the LC platform. That fact that the Challenger uses a modified version of the Charger’s chassis platform and the many shared drivetrain components leads many people to believe that the Chrysler Group engineers are free to swap parts from one to the other, but there is far more to putting a manual transmission in the Charger.

When the 2006 Dodge Charger (and 2005 Magnum and 300) were introduced, their floor pan was designed to accommodate an automatic transmission setup which relies on a shift-by-wire design. This means that the shifter inside of the vehicle doesn’t need to be connected to the transmission in the same way as a manual unit, so there is less need for holes to be cut in the floor pan. When an automaker submits a vehicle for crash test certification, even something as simple as the location and size of any holes cut in the floor pan are scrutinized, as those holes can have an impact on how the car stands up to a collision. On the other hand, when the Dodge Challenger’s LC platform was introduced and tested for the 2008 model year, the plan was to offer a manual transmission, so that floor pan had already been designed and tested with all of the holes in the right place for the automatic and manual transmission.

For the manual transmission to work in the Charger, the Chrysler Group would have to modify a chassis to accommodate the manual transmission shifter and then go through the entire crash test safety process again. Of course, prior to submitting the car to the feds for testing, the company would have to go through all of the computer generated models and internal testing procedures so not only would it be very time consuming – it would also be very expensive.

Big Cost, Low Demand
Aside from the fact that it would cost the Chrysler Group a great deal of time and money to get the Dodge Charger floor plan for the manual transmission access approved, there is the issue of a basic lack of demand. While it is nice for lots of people on the internet to say “I would buy a Charger if it came with a manual transmission”, we all know very well that if there was suddenly a manual transmission Charger, these people wouldn’t be running right out to buy one. The sad truth is that a great many people simply aren’t coordinated enough to drive a manual transmission and that has led to an increasingly low take rate among manual transmission models.

I recently wrote a piece about the sales specifics for the 2014 Chevrolet Camaro. The Camaro is the bestselling sporty car in America, with almost 81,000 units sold for the 2014 model year, but only about 18% had a manual transmission while the other 82% had an automatic transmission. Those poor sales figures for the manually shifted Camaro shows that the interest just isn’t there so while offering a manual transmission in the Dodge Charger sedan might help sell a couple more units annual – any sales increase would come far short of justifying the cost of getting one to market.

In the end, Chrysler is in business to make money so there is no chance of them spending big money to work a manual transmission into the Dodge Charger lineup when there is no chance of them making that money back. That sure-fire method of losing money on a product that simply wouldn’t sell is exactly why there will not be a Hellcat Charger with the manual transmission.