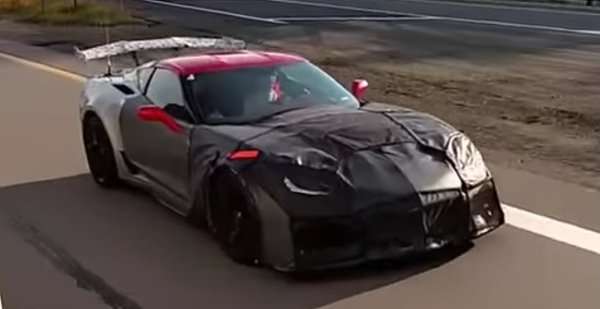 Another video has surfaced showing a handful of C7 Chevrolet Corvette ZR1 test cars on the open road, including a coupe, a convertible and three different rear spoilers – giving us our best look thus far at the next super-Vette from front to back.
Advertisement

While there has been no official confirmation from General Motors that a new Chevrolet Corvette ZR1 is on the way, all signs point to a new package coming with greater performance capabilities than the current Z06 package – and the majority of people around the industry expect that this higher performance C7 will be called the ZR1.

We don’t have any concrete information on a next generation Corvette ZR1, but there have been a series of videos showing these mysterious supercars out on the open road. The newest video comes from the folks at Indian Autos Blog, which shows a trio of what we believe to be C7 Corvette ZR1 test cars traveling in a convoy and with the video being captured from the window of a truck moving along with the Corvettes – we get our best look at these high performance test cars on the move. Most importantly, we get to see the Corvette ZR1 test mules in both coupe and convertible form, with what appears to be three different rear spoilers.

Corvette ZR1 Test Cars on the Move
This video of what appears to be a trio of Chevrolet Corvette ZR1 test cars driving along a Michigan highway. This video was captured by a truck driver who was driving along with these cars in traffic, who sent it to the crew from Indian Autos Blog. With the flow of the slow-moving traffic, the cars spend some time around the camera before speeding away, but the time that they spent next to the truck gave us our best moving pictures of the next gen Corvette ZR1.

The video begins with a heavily camouflaged Corvette ZR1 with a huge spoiler out back, and this is the same big wing that we have been discussing for ages now. The big spoiler draws the most attention, but we should pay closer attention to some less noticeable features of these Corvettes.

First and foremost, while the first and third Corvettes are hardtop modes, the middle Corvette ZR1 has a black soft top – making it very clear that GM is at least considering a ZR1 convertible. This car appears to have the same aggressive form up front and a large spoiler out back, just like the coupes, but this Vette has a retractable top, so you would certainly think that this is a Corvette ZR1 convertible.

The front ends are heavily clad in thick camo, but these Corvettes appear to have a lower front fascia that extends out much further – and at a very different angle – than what we see on the Corvette Z06. It is expected that the Corvette ZR1 will have a fascia with larger cooling openings below the headlights, along with a more prominent chin spoiler. Based on the way that this car is camouflaged, I would guess that these Corvettes have unique fenders and possibly a hood with a larger bulge in the middle.

Next, as each Corvette passes, notice that the doors don’t match the rear quarter panels, but all of the doors are the same muted grey. It is rumored that the Corvette ZR1 will have lighter weight body panels, so these could be primered carbon fiber doors, or some other unique, lightweight composite that will help cut the weight of the ZR1. Also, while looking at the side of the cars as they pass, you can pause the video to get a look at the wheels, but the video isn’t quite clear enough to get a good look at the brakes.

Finally, each of these three Corvette test cars appears to have a different rear spoiler. The front car has the huge spoiler which has been the topic of conversation since we first saw it stored inside of a test car, but the convertible and the rear hardtop ZR1 appear to have smaller, unique rear spoilers. The basic design is very similar, with a lower, two-pedestal design, but it looks as though the contour of each is slightly different.

Why Three Spoilers?
There could be a few reasons for the different rear spoilers on these Corvettes. It is expected that the ZR1 will have an ultra-high performance package, similar to the Z07 package for the Z06 – only far more extreme for the ZR1. Included in this higher performance package will be the massive rear spoiler shown on the front car in this new video.

The last possibility is that the Corvette ZR1 will come with two different rear spoilers which owners can swap out at their discretion. Say that an owner just wants to cruise around town – he or she can bolt up the lower profile spoiler – but if they are heading to the track, they will want to swap to the bigger spoiler.

Speculation aside, there is no question that the three camouflaged Corvette test cars shown here are more extreme than the current C7 Z06, so it is clear that GM is working on a higher performance Corvette – even if it isn’t called the ZR1 – and the video below offers the best look at this new super-Vette thus far.