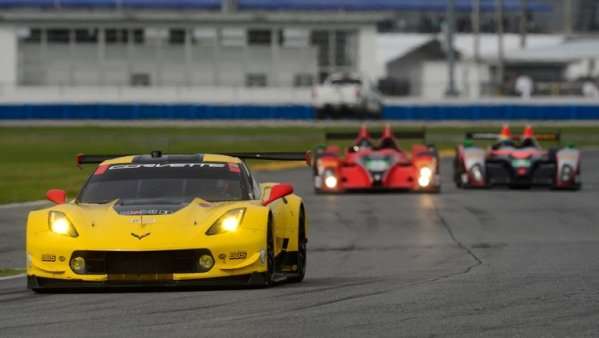 Last week during the opening stages of the Roar Before the 24 at Daytona Motor Speedway, we reported that one of the Corvette Racing teams had experienced a fire, but with the first official event of the 2016 IMSA endurance racing season finished up – the Corvette Racing cars ended up turning in the 2nd and 4th quickest lap times in the GT LeMans class.
Advertisement

Each year, the first event of the IMSA North American endurance racing schedule – this year called the Weathertech SportsCar Championship – is the Roar Before the Rolex 24 at Daytona Motor Speedway. This event prefaces the Rolex 24 hour race at Daytona later this year and the Roar isn’t so much a race as it is an elaborate practice program that allows the teams to see how their cars and drivers stack up to the competition. Basically, the teams running the Rolex 24 can show up to Daytona a few weeks early, spending 3 days on and off the track, making changes to see how much they can improve relative to the rest of the field.

Things didn’t start off well for Corvette Racing, but with the quick work of their crew, the teams were able to finish up in the 2nd and 4th spots in the GT LeMans class.

Corvette C7R at the Roar
Corvette Racing came into the Roar Before the Rolex 24 hoping to make a run at another championship after watching the #911 Porsche take the title in 2015. The Roar was the first chance for the Corvette C7R teams to assert themselves as the ones to beat in 2016, but they got a much rougher start than expected.

During an early session, Tommy Milner was piloting the #4 Corvette when smoke began to pour from the rear of the car. Milner brought the car to a stop on the track and the smoke turned to flames – burning up much of the rear end of the #4 Corvette. Images of the burnt car quickly traveled around the internet, leading some to believe that half of the Corvette Racing team was done for the weekend. Fortunately, the crew was able to fix up the #4 Corvette and by the end of the weekend – Milner and his co-drivers were one of the fastest cars in the GT LeMans class. In fact, Milner was still the 2nd quickest car in the first session, even in running a short session due to the fire.

Things all came together for the Corvette Racing teams in the 6th session, with the #4 car turning in the top time in GTLM with the #3 car a close second and in the 7th session of the weekend, the #3 was the quickest GTLM car on the track. Unfortunately, the time turned in by the #100 BMW M6 GTLM was a touch quicker than the best Corvette time, so when the event came to an end – the BMW held the top time in the class. The #4 Corvette was 2nd in the class and the #3 Corvette finished 4th, so while the team didn’t get the top spot – they still had a very strong showing after having such a severe problem on day 1.

The IMSA website is one of the slowest in the world to update, so final results still are not posted, but the Corvette team appears to be on track to make a run at the GTLM title in 2016.

Tesla Giga Berlin's New Hurdle: It's Not Only the Gov't, but Now Tesla Itself
Teslas Are Sold Out Until 2023, But The Timing May Reverse
END_OF_DOCUMENT_TOKEN_TO_BE_REPLACED