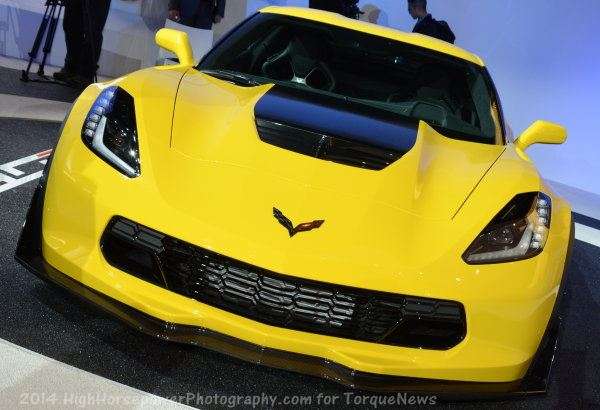 October 2014 marked the 1 year anniversary for the Chevrolet Corvette Stingray and in addition to improved numbers over each of the past two months, the Corvette once again beat the Dodge Viper, all Porsche cars combined and all other premium sports cars sold in the US.
Advertisement

The new C7 Chevrolet Corvette Stingray officially hit the market with full force in October 2013 and with 3,929 units sold in that first month, it remains as the best sales month for the new Corvette. Last month marked the 1 year anniversary of C7 sales and while October 2014 wasn’t as strong as that same month in 2013, Corvette Stingray sales improved after slower months in both August and September. In addition to October 2014 sales numbers showing an improvement over the preview two months – GM sold enough Corvettes to once again hold the title for the bestselling premium sports cars in America, with enough units sold to beat the entire Porsche car lineup once again.

October 2014 Corvette Sales
In October 2014, General Motors sold 2,959 examples of the C7 Chevrolet Corvette Stingray. This is a drop from the 3,949 units sold in October 2013, but October Corvette sales were better than they were in September, August, June, February, January and November 2013. In other words, October 2014 wasn’t a banner month for the Corvette, but it was still a very good month and after slow sales in both August and September - growth in a relatively chilly October is a good sign for the Corvette.

This growth in sales from the past two months likely relates to the introduction of the 2015 model year Corvette Stingray at dealerships around the country. Although there was a brief stop-sale order on the 2015 Corvette, those problems were easily fixed and with the introduction of the new 8-speed automatic transmission, consumers are clearly excited to get ahold of the new model year Corvette.

Corvette Crushes Viper Again, Leads All Premium Sports Cars
As has been the case every month since the new Corvette hit the market last October, the Stingray very comfortably outsold the Dodge Viper, with only 80 examples of the V10 Mopar supercar in October. That is a strong month for the Viper and with the Corvette being far more affordable than the Viper, we can expect the Vette to outsell the Viper pretty much forever. With the new Z06 slated to arrive soon, the real sales battle in the American supercar market will begin between the 650hp Corvette and the 640hp Viper, but it is unclear whether or not GM will offer up sales numbers for just the Z06 rather than lumping them in with Stingray sales.

In addition to outselling the Dodge Viper, the Chevrolet Corvette Stingray once again lead all premium performance cars sold in the US, including all of the Porsche cars. The bestselling Porsche last month was the 911 lineup with 979 units sold while the Boxster/Cayman were second with 702 units sold and the Panamera was third with 533 units sold. When you add up the sales of all of the Porsche cars, you get a total of 2,214 units sold – meaning that GM sold 745 more Corvettes last month than Porsche sold cars. Porsche also sold 712 examples of their Cayenne SUV and 741 copies of the Macan SUV, which bring the total Porsche vehicles sold in October to 3,667, but if Porsche sold one less vehicle in the US, the Corvette would have outsold the entire Porsche brand.

It should be noted that the Porsche cars are the bestselling premium performance cars sold in America after the Corvette so not only is the Stingray beating the competition – it is beating many of its closest competitors combined. The C7 Corvette leads in performance, efficient, price and sales. That is domination.