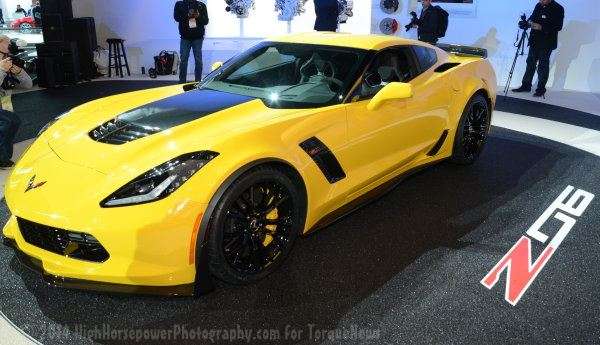 I have crunched the numbers for August 2014 sales and although Chevrolet Corvette Stingray sales dipped a bit last month, GM still sold enough C7 Corvettes to both crush the Dodge Viper and outsell the entire lineup of Porsche cars – making the Stingray once again the bestselling premium sports car sold in the USA.
Advertisement

While the Chevrolet Camaro, Ford Mustang and Dodge Challenger are the three bestselling performance cars/sports cars (definitions may vary by opinion) in the US auto market, the Chevrolet Corvette Stingray has long been the bestselling premium performance car/sports car sold in America. The Corvette faces off against the likes of the Dodge Viper, the Porsche 911 and pretty much everything else from Europe and in the past, the Corvette has beaten all of those models with ease. Now that the C7 Stingray has arrived, the Corvette is handing out a monthly sales beating with numbers that can almost rival the muscle cars – and that beating continued in August 2014 even though the Corvette had a slow month.

Corvette Versus America
First off, in the battle of American high performance sports cars, the battle is between the Chevrolet Corvette Stingray and the Dodge Viper since Ford hasn’t offered a 2-door, 2-seat sports car since the GT was killed off back in 2006. In August 2014, the Corvette handed another unmerciful beating to the Dodge Viper last month, outselling the Viper by a margin of 2,679 to just 38. This means that GM sold 70 times more Corvettes than Chrysler sold Vipers…70 times more. With 25 selling days in August, GM sold around 107 Corvettes each day last month on average so there were likely more Corvettes sold on August 1st than there were Vipers sold in the entire month. Mind you, the Viper costs more than twice as much as the Corvette so there aren’t real expectations of the $102k+ Viper outselling the $60k Stingray – but for lack of a better comparison in the American market, we have to look at the sales of the two premium sports cars.

Corvette Versus the World
The bestselling sports cars in America from a brand outside of the US is the Porsche 911 and with 1,030 examples sold in August, Porsche had a good month. However, even in a relatively bad month for the new C7 Stingray, the Corvette still outsold the 911 (which is combined with the 918 by the German automaker) by a margin of 1,649 units. This represents a ratio of roughly 2.6 Corvettes sold for every 1 Porsche 911, but far more impressively – the Corvette’s slow month in August still had more units sold than all Porsche cars in the same month. When you add up the August 2014 sales numbers for the 911, 918, Panamera, Boxster and Cayman, you have a total of 2,086. GM sold almost 600 more Corvettes than Porsche sold cars and only the addition of the Macan and Cayenne sport utility vehicles allowed Porsche to outsell the Corvette.

Looking at some other premium performance cars/sports cars around the industry, Audi sold 50 examples of the R8 and 86 examples of the smaller TT in August. The entire Jaguar brand sold 1,184 vehicles last month and no other high volume brand in America offers a car that can really be compared to the Corvette…making the new Stingray the most popular premium sports car in America…and this is a vehicle that so many long time Corvette fans were certain would fail because it has square taillights.

2015 Could Be Even Bigger
The 2014 Chevrolet Corvette Stingray is selling like crazy, but things could actually improve when the 2015 models arrive in dealerships. First off, the 2015 model year brings about the arrival of the C7 Z06 in both coupe and convertible form which will help improve sales numbers – even if only by a small amount. Also, the addition of the Z06’s new 8-speed automatic transmission to the “normal” Corvette Stingray – which makes the self-shifting Corvette faster and more efficient – should help to make the 2015 Stingray even more attractive than the 2014 models.