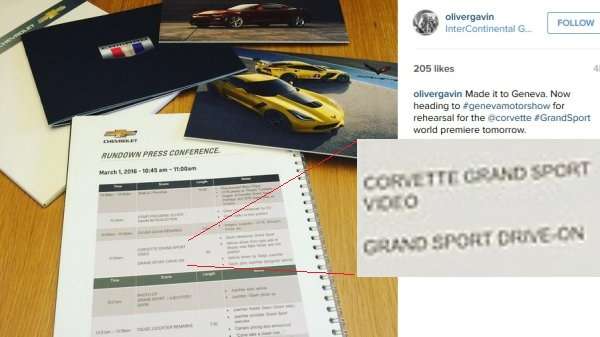 According to an Instagram post this early this from Corvette Racing driver Oliver Gavin, a new Chevrolet Corvette Grand Sport will debut tomorrow on the opening day of the 2016 Geneva Motor Show.
Advertisement

While there has been no official word from General Motors, the image posted by endurance racing champion Oliver Gavin shows what looks to be the schedule of events to introduce the next generation Chevrolet Corvette Grand Sport. We can see from the Instagram post that at 10:50am on March 1st, Oliver Gavin will introduce the new Corvette Grand Sport with a video before Corvette lead engineer Tadge Juechter drives the newest C7 out for the world to see. This introduction will be followed by a quick photo op with Juechter, Gavin and the new Corvette, followed by a full walk-through of the Grand Sport details from the chief engineer of the modern GM supercar program.

There are no details as to what Juechter will tell us about the new Corvette Grand Sport, but based on past cars with the same name – we can make some guesses ahead of tomorrow’s debut.

The 2017 Corvette Grand Sport
The Corvette Grand Sport package was last offered for the 2013 model year and when it was introduced for the 2010 model year, it effectively replaced the Z51 package – serving as a high performance handling and cooling package for the “base” Corvette. For the C6, the Grand Sport package included large sway bars, uniquely tuned dampers, stiffer springs, the Z06 rear spoiler, a transmission cooler, a dry sump engine oil system, brake cooling ducts for the Z06 brakes, flared front and rear wheel openings and lightweight wheels wrapped in high performance rubber.

For the C7 Corvette, I would expect that the Grand Sport will be based on the Stingray with the LT1 V8, but we can expect the handling bits of the Stingray to be replaced by higher performance items – likely including some goodies from the C7 Z06.

The 2017 Corvette Grand Sport will almost certainly have the newest version of the Magnetic Ride Control system with more track-friendly springs and dampers. I would also expect a premium braking package with cooling ducts, package-specific wheels wrapped in the stickiest street tires possible and an enhanced cooling system for the engine, transmission and rear differential. Finally, the 2017 Corvette Grand Sport could have some unique body upgrades that will improve aerodynamics a bit, like the rear spoiler from the Z06 package.

In short, I would expect that the 2017 Corvette Grand Sport will be a super-handling package for the C7 Stingray. Based on the success of the new Stingray, this newest Grand Sport could be a real beast on the track – giving Porsche owners an even bigger headache when their six figure German sports car is overtaken by a Corvette that will likely cost well under six figures.

Check back to TorqueNews.com tomorrow for a full look at the new Corvette Grand Sport!