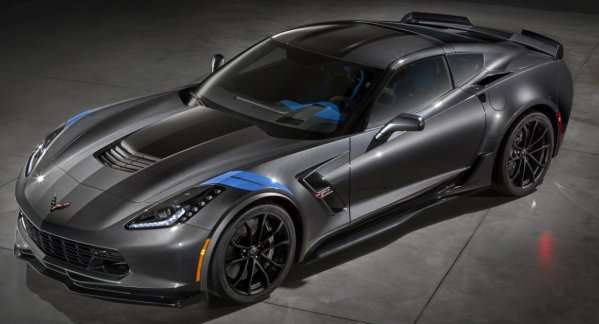 The 2017 Grand Sport will be the most track capable Corvette Stingray for the new model year and with a price starting at $66,445, this new road-handling package is only $10k more than the base model Stingray – while being only a couple grand more than a Corvette 1LT built to go fast.
Advertisement

“The racing DNA of the original Grand Sport race cars is in the 2017 model, adding greater dimensions of capability and driver involvement to the Corvette’s award-winning architecture, for a purer driving experience,” said Harlan Charles, Corvette product marketing manager. “It is a worthy successor to the spirit of the originals.”

However, if you consider the fact that the 2017 Corvette Grand Sport includes standard features which are part of the Stingray Z51 package like the staggered front and rear wheels with Michelin Pilot Super Sport, the electronic limited slip differential, larger front and rear brakes and the Magnetic Ride Control suspension system, it is more accurate to compare the Grand Sport pricing to that of a correctly appointed Stingray.

The 2016 Corvette Stingray 1LT with the Z51 package and Magnetic Ride Control has a price of $63,190, so at $66,445, the unique features of the Grand Sport package only add $3,255. This includes the package-specific suspension components, the lightweight front and rear wheels, the wider rear quarter panels, the unique grille and the other non-functional upgrades like the logos and the package-specific fender vents – all for just $3,255. Also, while we don’t have the pricing for the new Z07 package for the Grand Sport, that is the only way that you can get the Z06 Carbon Ceramic Matrix brakes and the Michelin Pilot Sport 2 Cup tires on a Stingray-based C7 Corvette.

Performance Figures
The 2017 Corvette Grand Sport is powered by the same LT1 as the Corvette Stingray with 460 horsepower, and buyers can pick either the 7-speed manual transmission or a unique 8-speed automatic transmission with package-specific gear ratios. When equipped with that automatic transmission and the tires of the Z07 package, the new Grand Sport is able to dash from nil to 60 miles per hour in just 3.6 seconds while running through the quarter mile in just 11.8 seconds.

The combination of the standard Magnetic Ride Control with Grand Sport-specific dampers and stabilizer bars with the 14 inch front brakes and 13.4 inch rear brakes affords incredible cornering and stopping abilities, laying down 1.2g on the skid pad while stopping from 60 miles per hour in less than 100 feet.

Click here for a full rundown of the 2017 Corvette Grand Sport details from the debut earlier this year!