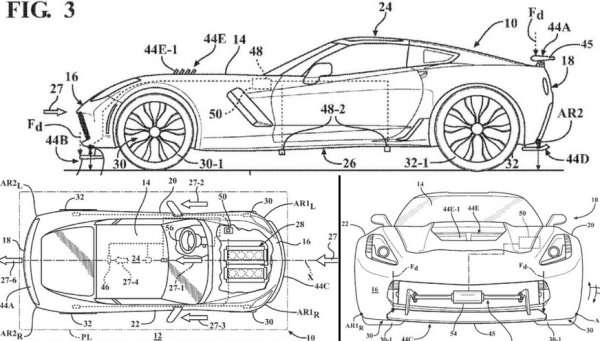 The Corvette could soon get an Elaborate Active Aerodynamics Package

General Motors has filed for a patent with the US government for an elaborate active aerodynamics package which is displayed in the filing on a C7 Corvette – with the fine print detailing an array of adjustable components which adapt to the vehicle’s motion based on a variety of inputs.
Advertisement

The Chevrolet Corvette has long been the leader in the world of premium American performance cars and based on a new patent filing from General Motors, the company is working on an active aerodynamics package which has only been offered on some of the world’s most expensive exotics in Europe. For example, the Pagani Huayra and the Bugatti Veyron have active aerodynamics systems which adjust at high speeds for improved downforce and stability, but based on the details in the patent filing, the Corvette active aero system will be far more elaborate – from the components to the way that the entire system functions.

Corvette’s Future Active Aero
The active aerodynamics setup in current production cars like the Pagani and the Bugatti function based on the speed of the vehicle. As each of those super-exotics reach high speeds, they have aero bits which change their angle relative to the ground to improve downforce and, more importantly, to prevent lift. Those systems improve handling, but their key purpose is to make those 200+ mile per hour vehicles easier to handle at extreme speeds.

The Chevrolet Corvette active aerodynamics system will be more elaborate, taking into account vehicle speed, body roll, body angle, ride height from wheel to wheel and steering angle. If GM is working to incorporate all of those variables into the Corvette active aero system, we can be sure that this package is for more than just better handling at high speeds. A system which adjusts with all of those variables could use air flow to help the Corvette get through turns more quickly, working with the magnetic suspension setup to make the Chevrolet supercar even more super.

Based on the patent images from the GM filing, this advanced active aero system will include a centered front splitter, canards ahead of the front tires, shutters in the center of the hood, a rear decklid spoiler and a rear diffuser. If these components were fitted to a Corvette as they are described in the patent filing, they would all work together to adjust airflow to the ideal conditions based on those inputs mentioned above. For example, when accelerating at lower speeds out of a turn, the system would deliver less front end downforce since you don’t need as much of that as, say, when you are rocketing through a long, sloping, high speed turn. Along the same lines, the shutters in the hood could open and close to adjust the air flow through the engine bay to improve high speed aerodynamics and low speed cooling.

It should be noted that the Chevrolet Corvette in the patent filings appears to be a C7 Z06, but this high tech, active aero setup could just as easily apply to the next generation Corvette….or it could be part of the C7 ZR1 package which has been discussed for years now. If nothing else, whichever Corvette gets this elaborate active aero package will be one of the most advanced supercars in the world when it comes to making use of the air moving around the car.

GM’s patent filing for his system is lengthy and incredibly detailed, but if you want to have a look at all of the specifics for yourself, check out the Corvette active aero paperwork by clicking here.