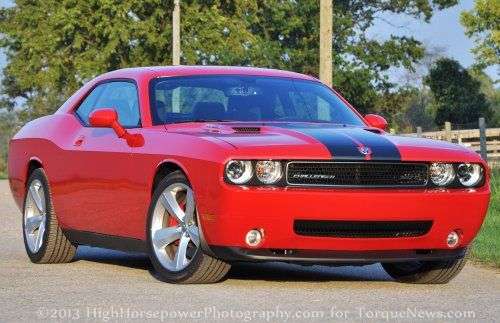 While sitting in on a round table discussion with the folks from Motor Trend, SRT boss Ralph Gilles offered a few bits of information on the next generation Dodge Challenger - including a 2014 New York International Auto Show debut for the redesigned Mopar muscle car.
Advertisement

The announcement of the 2014 New York debut of the 2015 Dodge Challenger came from SRT boss Ralph Gilles as he met with a handful of people from Motor Trend for a video roundtable to discuss the 2014 SRT Viper, the new Viper TA and the Motor Trend tests that first found the Chevrolet Corvette ZR1 victorious over the new Viper GTS followed by a second test where the new Viper TA bested the Corvette ZR1. After Gilles and the rest of the crew in the video were done talking about the Viper – during which time the new Chevrolet Camaro Z28 came up – the discussion turned to the Challenger and SRT’s answer to the new high performance Camaro.

“The Challenger is about to go under the knife…its actually under the knife as we speak,” said Gilles. “We’re doing a lot to [the Challenger] and we're going to come with an answer for [the Camaro Z/28] and for our friends at Ford.”

Ralph Gilles ended the discussion on the 2015 Dodge Challenger by saying that “this time next year, you will see exactly what I am talking about.” With that simple comment, the longtime bigwig of the Chrysler Group and the current head of the high performance SRT brand has essentially confirmed that the next generation Dodge Challenger – presumably a 2015 model year vehicle – would debut at next year’s New York Auto Show. This doesn’t come as a huge surprise as the updated business statement released by Chrysler earlier this year revealed that there would be some new models coming to both Dodge and SRT that many of us believed would be the new Challenger but Ralph’s comment to Motor Trend all but confirms a 2014 NYIAS debut of the next generation Challenger.

Nothing is known about what to expect from the next generation Dodge Challenger but with Gilles’ comment about having an answer for the Z/28 and Ford, we would presume that the 2015 Challenger will be far more vicious than the current models. While the 470 horsepower Challenger SRT8 will make short work (stock versus stock) of the Camaro SS or the Mustang GT in terms of straight acceleration, Dodge and SRT don’t have a real answer for the likes of the Camaro 1LE, the Camaro Z/28, the Camaro ZL1, the Mustang Boss 302 or the Shelby GT500 Mustang. There have long been rumors that SRT is working on a supercharged Hemi that will make substantially more power than the current offering with the help of a factory supercharger and this new blown Hemi is supposedly codenamed the Hellcat.

Realistically, to compete with the 662 horsepower Ford Shelby GT500, the 505 horsepower Camaro Z/28 or the 580 horsepower Camaro ZL1; the bigger, heavier Challenger is going to need some serious power. Many Mopar fans expect that the next generation Challenger lineup will look very much like the current layout with a base V6 and an affordable R/T model but it has been long rumored that there will be an SRT branded (like the Viper) Challenger that would offer extreme levels of performance that could get into the range of 650 horsepower.

A supercharged 2015 SRT Challenger with 650 horsepower and maybe a little weight reduction would more than easily compete with the less powerful Camaro Z/28 and ZL1…although the 662 horsepower GT500 might still be a stretch. That is, of course, unless SRT packs even MORE power into the top of the line performance package for the 2015 Challenger but in competing with the GT500, SRT also needs to make sure that they aren’t stepping on the toes of the mighty Viper.

This story about the Dodge Challenger SRT8 is updated on May 18, 2018.

mike wrote on March 29, 2014 - 6:52pm Permalink
how are they stepping on toes with the viper its a different car a sports car the challenger is a muscle car let the muscle car rain supreme like it did years ago