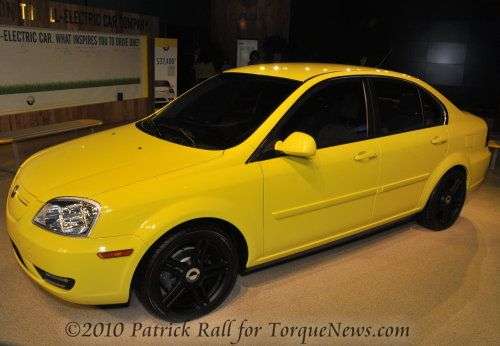 Earlier this year, electric sedan manufacturer Coda announced that they would be introducing their new EV to the US market in late 2010 – a surprise considering that this was the same timeframe for the US debut of the Nissan Leaf and Chevy Volt.
Advertisement

This would lead you to believe that the little-known automaker planned to take on the Leaf and Volt as they all hit the market at the same time and Coda picked the green car-friendly LA Auto Show to make their grand entrance to the market.

What appeared to be Coda’s intention to go head to head with the two biggest names in the electric car market was made more surprising when Coda announced that their sedan would carry a price tag $44,900 – making the Coda sedan the most expensive of the three vehicles discussed. Coda execs believe that price is not the top concern in the electric car segment but many question whether people will pay top dollar for a car built by a company unheard of by the majority of American consumers.

A rocky start for Coda comes with more bad news

Since introducing their electric sedan, Coda has gone through a variety of growing pains including company CEO Kevin Czinger leaving followed by the company’s VP of sales also departing. However, those two management shake-ups are nowhere near as damaging to the company as the recent news that the Coda sedan will not meet its original release date of 2010… with hopeful customers forced to wait until late 2011 to hit the market.

Coda had a tough battle ahead of them with their little-known brand sporting the biggest price of the major electric cars coming to market in the US, but could this lengthy delay prove to be helpful for the small automaker? The company claims that they want to make sure that the Coda electric sedan is perfect prior to being released to the general public but perhaps this is their way of avoiding a direct shootout with the Nissan Leaf and Chevy Volt?

The delay until late 2011 for Coda could go two ways. The first is that the Leaf and Volt sell very well and buyers are clamoring for their own electric vehicle. This would allow Coda to make strategic moves through marketing and advertising to help improve their chances and hype of their release later next year. Also, being introduced in a period where there is less likely to be other big name electric cars hitting the market may allow for more attention to the small automaker.

The other possibility is that the lengthy wait for hopeful Coda owners will be too much, driving them to look for other alternatives as the company doesn’t have the brand following that Nissan or Chevy enjoy. Unfortunately, it may be more than a year before we see how well the high priced Coda fairs in the US market but with a product that looks to be fully ready for production, perhaps the company can weather the storm and compete with the Leaf and Volt in the US market.