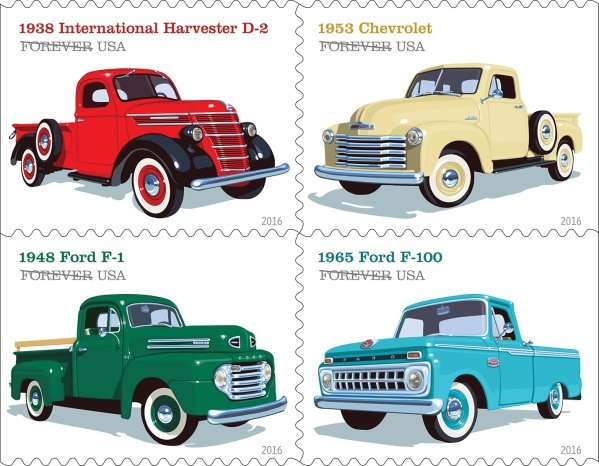 Classic Ford, Chevy and International Trucks on New US Stamp

The newest collection of United States Postal Service stamps will feature a pair of classic Ford pickups, a classic Chevrolet pickup and an International Harvester pickup – all of which are displayed in color on a quartet of “Forever” stamps.
Advertisement

There is no market in the world where pickup trucks are more popular than the United States, which is evident by the fact that the Ford F Series has been the bestselling vehicle in American for almost four decades and the fact that the top three bestselling vehicles in America are always trucks. To celebrate the American love of the truck, the United States Postal Service has rolled out a 20-pack of new Forever stamps emblazoned with some of the most legendary early American pickups.

Pickup Trucks Forever Stamps
The newest auto-themed stamps from the US Postal Service are the “Pickup Trucks Forever” stamps, and as you can see in the image above, this book of twenty stamps includes four different pickups from the early days of the truck boom in America. This includes the 1948 Ford F1, the 1965 Ford F100, the 1953 Chevrolet and the 1938 International Harvester D-2. These stamps were designed by art director Antonio Alcalá of Alexandria, Virginia and the truck renderings on the stamps were done by artist Chris Lyons of Pittsford, New York.

These stamps will officially debut on July 15th at the Syracuse Nationals at the New York State Fairgrounds. The price of a single Forever stamp right now is 47 cents, so the book of 20 Pickup Truck Forever stamps will cost $9.40 and once they are introduced in New York, they should be available at your local post office soon after.

Here is a quick look at why these four pickup trucks have been chosen to represent the segment on the new USPS stamps.

Finally, while the 1953 Chevrolet pickup doesn’t have a story quite as romantic as the other three trucks – this classic Chevy truck has an iconic look that is still common today at any good street rod show.