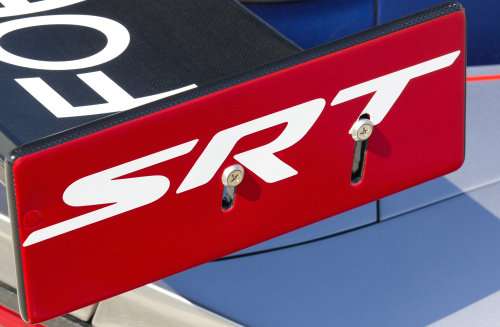 The Chrysler Group’s high performance Street and Racing Technology (SRT) brand continues to make sure that their presence is known in the motorsports world as the American LeMans Series has announced that the Grand Prix of Baltimore will be presented by SRT and the ALMS stop in Baltimore in September will be named the Baltimore Sports Car Challenger Presented by SRT.
Advertisement

On Friday August 31st,Saturday September 1st and Sunday September 2nd, the American LeMans Series with join the IZOD IndyCar Series, the Firestone Indy Lights, the USF2000 National Championship and the Star Mazda Championship in Maryland for the 2012 Grand Prix of Baltimore Presented by SRT. In addition to serving as the title sponsor of the weekend’s events, the SRT brand will have a pair of vehicle serving as the official car and truck of the event with the 2013 SRT Viper and/or the 2012 Jeep Grand Cherokee SRT8 leading the field to the green flag for every major race in Baltimore. Finally, the SRT brand will have two teams competing in the 8th stop of the 2012 American LeMans Series – with the Maryland event now being named the Baltimore Sports Car Challenge presented by SRT.

“This is exactly the kind of activation that reflects the bold commitment SRT Viper is making to the American Le Mans Series presented by Tequila Patrón and to our fans,” said ALMS President and CEO Scott Atherton. “It also speaks volumes about the strength being placed behind the SRT brand. After a successful debut of its two Viper cars earlier this month at Mid-Ohio, we are certain that SRT’s involvement as presenting sponsor of the entire weekend will help build upon what was a superb Baltimore event last year and will take this year’s to the next level.”

In addition to serving as the title sponsor of the racing weekend and the ALMS event, offering up the two pace vehicles for all of the weekend’s events and entering two cars in the American LeMans Series race, the SRT brand logo and vehicles will be well represented around the grounds in addition to getting plenty of exposure during the race telecasts.

"Baltimore's inner harbor is a beautiful backdrop for world-class racing on Labor Day weekend," said Beth Paretta, Director of Marketing and Operations - SRT Brand and Motorsports, Chrysler Group LLC. "We're excited to showcase our performance portfolio of SRT vehicles to a discerning crowd of motorsport enthusiasts, and the Baltimore Grand Prix is the perfect location. We're also proud to be competing in the American Le Mans Series again with our new Viper GTS-R team, and we look forward to seeing all of our fans in Baltimore."

American LeMans Series fans can catch the Baltimore Sports Car Challenge Presented by SRT on ABC starting at noon on Sunday September 2nd while those fans with an Xbox 360 can watch the race live starting at 4:15pm on Saturday September 1st via the ESPN3 app.

The American LeMans Series is in action this weekend at the Road America Road Race Showcase with the first practice session scheduled to take place at 3pm today in Wisconsin. The four hour long race at Road America runs from 2:30 to 6:30 on Saturday August 16th with live coverage on ESPN3. The television broadcast is planned for Sunday August 19th at 2pm on ESPN2.

The 2013 SRT Viper GTS-R race teams struggled a bit in their debut at Mid Ohio Race Course but the company plans to run a full schedule in 2013 – with their new sponsorship deal showing that the SRT division is serious about making a comeback in the world of road racing.

TorqueNews will continue covering the progress of the new Viper GTS-R in the racing world…hopefully reporting more success by the end of the 2012 season. Counting this weekend’s stop in Wisconsin, there are four events left in the 2012 ALMS season. We know that the Viper teams will compete this weekend and a sponsorship for the Baltimore event seems to be a clear indication that they will also compete there. SRT has already spent some time practicing at the second to last venue of the year so we expect to see the #91 and #93 at Virginia International Raceway in mid September and many expect that the Vipers will round out the 2012 ALMS season at the Petit LeMans at Road Atlanta.