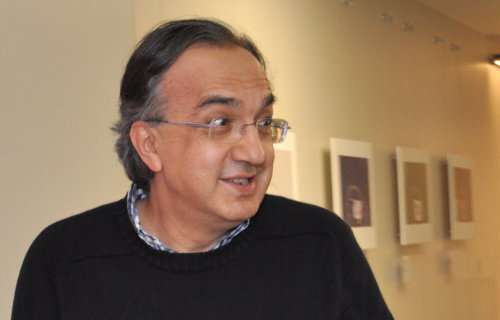 Last week, we brought you the news that Chrysler CEO Sergio Marchionne had declined salary or bonuses for his work at Chrysler through 2011 but fans of the sweater-wearing auto genius shouldn’t worry too much about the Chief being able to pay his bills as it was announced that Marchionne mad around $19 million for his work at Fiat last year.
Advertisement

While Sergio Marchionne is best known in the US for his role as the Chief Executive Officer of the Chrysler Group although in Europe, Sergio has long been known as the man behind the wheel at the automotive super group Fiat SpA. Marchionne has had a major hand in helping the Chrysler Group climb out of the grasp of government control as a subsidiary of Fiat SpA and even though he hasn’t technically gotten paid for the past two years with Chrysler, his gig with Fiat made paid him 14.45 million Euros ($18.88 million US Dollars) in 2011. Based on those numbers, it is no wonder that Marchionne is able to decline pay at Chrysler in an effort to continue to help the company catch its breath after the industry collapse in 2009. Click here to read more about Marchionne declining his Chrysler pay for 2011.

Sergio Marchionne’s 2011 pay from Fiat SpA includes a basic salary of 2.45 million Euros (3.2 million US Dollars) plus stock related compensation with a current value of 12.01 million Euros ($15.68 million USD), although the hefty amount of value in stock comes with an inherent risk. With the vast majority of his $18.88 million dollar salary coming in the form of company stock, Marchionne assumes the risk of the stock dropping in value but at the same time – you like to see a coach who is willing to bet on his team.

Marchionne’s 2011 Fiat pay may seem outlandish to the average Joe, but considering the wages of some company CEOs, such as Volkswagen’s Martin Winterkorn who makes around $23 million a year or Ford Motor Company’s Alan Mulally who brings in roughly $26 million a year – the Fiat boss was in the ballpark with the other top automotive bosses around the world. If anything, considering that Marchionne oversees Fiat, Ferrari, Maserati, Abarth, Alfa Romeo, Lancia, Chrysler, SRT, Ram, Dodge, Jeep and the Mopar brand – he oversees more major brands than any other CEO in the world with companies on different continents and he does it for less money than other high profile CEOs.

The good news for Sergio Marchionne (you know, other than making almost $19 million a year) is that the Chrysler Group has been one of the strongest growing automakers in the US while also spreading their reach around the world. If things continue to improve under his watch, the globetrotting CEO could stand to make a fair deal more money over the coming years both from his role with Fiat SpA as well as maybe even getting paid by Chrysler.