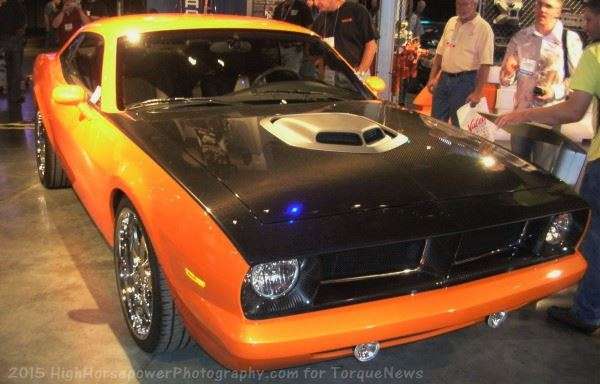 Chrysler Trademarks Cuda Again, But Don't Get Your Hopes Up

The Chrysler Group has once again successfully extended their trademark of the term Cuda, but I don’t believe that the latest filing should cause anyone to get their hopes up for a new high performance muscle car sporting the Cuda name – at least not anytime soon.
Advertisement

Since the Dodge Challenger debuted back in 2008, there has been a steady rumor that the Cuda would be returning to the Chrysler Group lineup. This was bolstered by the fact that Mopar brought out a customized Challenger with Cuda badging to the SEMA Show in 2007, but other than that, the only “proof” of a Cuda was trademark paperwork.

For some time, it was believed that the Plymouth brand was being reincarnated and the Cuda would return with it, but when SRT became its own brand, it was expected that we could see an SRT Cuda in showrooms. However, SRT as a brand is dead, instead serving as a trimline for the Dodge and Jeep brands and the likelihood of seeing a Dodge Cuda is very low. The rumors have now shifted to the Cuda being a sort of high performance variant of the Dodge Challenger, sold as a Chrysler – which I also do not expect to ever see.

In short, I don’t think that the Chrysler Group is cooking up a modern Cuda, as the name simply doesn’t fit in the Dodge or Chrysler brands. So why continue to trademark the name?

Trademarking Cuda
Every time we hear about Chrysler trademarking the Cuda name, the internet explodes with unsubstantiated rumors that there is a new high performance version of the Dodge Challenger on the way. Unfortunately, automakers quite frequently trademark names without any immediate intention of using them simply to “keep them in their pocket”. Basically, Chrysler is trademarking the Cuda name as a means of preventing some other company from using it in the automotive world.

While I certainly don’t foresee Ford or GM offering a Cuda were Chrysler to relinquish the rights to the name, an aftermarket tuner could call an in-house package for the Dodge Challenger a Cuda without Chrysler having any say in the matter. For example, it Chrysler let go of the Cuda trademark, a tuning company like Saleen could market their own Cuda based on the Challenger, whereas right now Chrysler could prevent that since they own the Cuda name.

Running Out of Time
The problem with trademarking a word or phrase for use on an automobile is that the company has a limited amount of time to use the word on a vehicle before the trademark expires. In the case of the Cuda name, the current trademark began back in mid-2014. When the company didn’t use the name for a vehicle later in 2014, they filed for a 6-month extension on the trademark, during which time they had to use the name. They did not, so they had to file for another extension – and then another. On December 3rd, the company officially received the third extension out of the allotted 5 extensions on a given trademark.

This means that if Chrysler doesn’t use the Cuda name in some way on a vehicle before using the final two extensions, they will not be able to hold onto the name. This means that if they want to protect the Cuda name, they will be forced to use the name in some way on a future road-going vehicle. The problem is that Chrysler should be able to extend the trademark through the middle of 2017 before their possession of the name expires.

In short, what does the trademark extension of the Cuda name mean for Chrysler? Right now, nothing – but if the company wants to keep the name from falling into the wrong hands, they will absolutely have to use it within the next year or so.