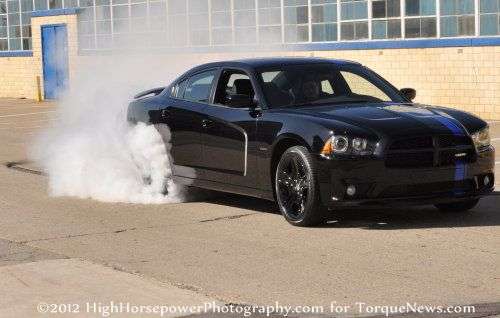 Chrysler's Mopar division to celebrate 75th birthday with the Mopar '12

On Tuesday, January 31st at 8:30am (EST), Chrysler’s Mopar Performance Parts division will celebrate its 75th anniversary at one of their locations in the Metro Detroit area and among the festivities, the Chrysler Group will roll out the third installation in the Mopar branded vehicle lineup with the new Mopar ’12 – although there is no indication as to what this year’s Mopar-modified vehicle might be.
Advertisement

The Mopar brand has long been known for offering factory replacement items and high performance aftermarket components for Dodge, Chrysler, Jeep, Plymouth, Ram and SRT vehicles for a very long time but starting with the 2010 model year, the Mopar brand began offering their own uniquely modified vehicles. The first - named the Mopar ’10 – was based on the Dodge Challenger R/T and in addition to an improved handling package, the Mopar ’10 Challenger featured a distinct black exterior with blue, red or silver trim. Inside, the Mopar ’10 also got some dress-up goodies to make these limited edition muscle cars stand out from a non-Mopar Dodge Challenger R/T. For the 2011 model year, Mopar turned their attention to the redesigned Dodge Charger R/T for the Mopar ’11 which, like the 2010 Mopar-modified Dodge Challenger, featured handling upgrades along with aesthetic improvements to lure Mopar enthusiasts into chasing these limited edition high performance sedans. This leaves us wondering…what will Mopar feature for the new Mopar ’12?

As part of the 75th anniversary celebration on the morning of January 31st, Mopar will unveil their new Mopar ’12 but the Chrysler Group hasn’t offered any hints as to what Chrysler, Dodge, Jeep, Ram or SRT vehicle this new limited edition Mopar model will be based around. Many Mopar enthusiasts expect that the Mopar ’12 will once again be based on the Dodge Challenger or Dodge Charger, as these are the vehicles that really exemplify the Mopar muscle attitude but with so many popular models in the lineup, will Mopar be so quick to “re-use” one of the vehicles which they featured in 2010 and 2011? The Chrysler Group has a handful of sporty models which would cater to being fitted with Mopar goodies, such as the Dodge Durango, the Jeep Grand Cherokee and the Chrysler 300C – all of which offer the same 5.7L Hemi power that has been featured in the previous two Mopar branded vehicles. There is also the possibility of Mopar turning their attention to the go-fast-friendly Ram 1500 Express, which also packs the 5.7L Hemi and with so many Mopar lovers modifying their Rams for performance; a specially designed Ram 1500 featured as the Mopar ’12 could be a popular model with long time Mopar faithful.

The other possibility, albeit a long shot, would be for Mopar to doll up the sexy new Dodge Dart R/T to help build excitement for the upcoming compact sedan. Based the Mopar ’12 around the new Alfa Romeo-based Dart would certainly be a massive departure from the Mopar ’10 and Mopar ’11 but considering the importance of the Dart’s success to the Chrysler Group – it certainly wouldn’t be out of the question. However, with so many Mopar enthusiasts basing their love of the brand around the high performance V8 engine – a Mopar-modified Dart might not resonate well with the old timers in the group.

Regardless of what the Mopar brand chooses for their new Mopar ’12, it will be unveiled amidst a big presentation tomorrow morning near Detroit and TorqueNews will be on hand covering the event. In addition to unveiling the new Mopar ’12, the Chrysler Group will offer attendees a look at the history of the Mopar brand past and present along and best of all – the entire event will be streamed via the internet with prizes for those watching at home!

Those of you who cannot make it to the event can watch the streaming video right here on TorqueNews, so for your chance to see the unveiling of the new Mopar ’12 and to win a Mopar prize pack, bookmark this page and stop back in tomorrow at 8:30am EST to join in on the festivities in the window below! Check out the gallery on the right of the Mopar '11 at its April 2011 debut by clicking any of the thumbnails.