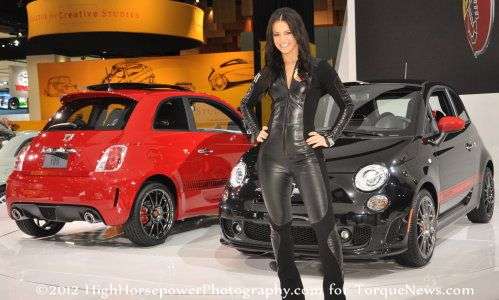 The dust has cleared from the first weekend of the 2012 New York Auto Show and now that we have had a chance to sit down and study March 2012 sales – the Chrysler Group is once again the top dog in terms of year over year growth with a company improvement of 34%.
Advertisement

The Fiat 500 first hit the US market in March 2011 so this March brought about the first chance to compare year over year sales for the sporty Italian compact. Fiat fittingly sold 500 units of the 500 Coupe last March but with a 3,712 coupes and cabrios sold last month, 2012 brought about an improvement of 642%. The Fiat 500 lineup can expect to see year over year improvements, bolstered by the rising fuel prices along with the introduction of three new models over the next few months. 2012 will bring US consumers the Fiat 500L (Large), the Fiat 500 Electric and the high performance Fiat 500 Abarth.

The Chrysler brand was the second strongest brand the automaker group that shares its name in March 2012 with an increase of 70% compared to the same month last year thanks to all three of their current models showing strong sales in March. Growth was led by the Chrysler 300 as the luxury sedan moved 7,336 units for an improvement of 169% compared to March 2011. The Chrysler 200 was second in sales with a jump of 121% and the Town & Country was third with an increase of 32%. In terms of sales volume, the 200 topped the list for Chrysler with 14,914 units sold followed by the Town & Country minivan at 12,476 and the flagship 300 was third. For the year, the Chrysler 200 and Chrysler 300 have both moved better than 200% more vehicles than they did in the first quarter of 2011 – a great sign of the public reception of their redesigned 200 and 300 sedans.

The Jeep brand was next in line in terms of growth with an increase of 36% compared to March 2011. The Jeep Liberty was the top performer from the Trail Rated brand in terms of growth with an improvement of 46% while the Wrangler and Grand Cherokee were tied for second (and essentially third) with 43% improvement each. When it comes to sales volume, Jeep led by the Grand Cherokee with 14,096 sport utes sold followed by the Wrangler (12,557 units) and the Liberty (7,605). Like the Chrysler brand, all of the current production models from Jeep showed positive growth last month compared to the same month in 2011. The same is true for the first quarter, as all of the Jeep models have showed strong growth through the first quarter of 2012 with the “weakest” being the Patriot at 21%.

The Dodge brand of cars and sport utility vehicles was tied for third in terms of growth among the Chrysler Group with the Ram Truck brand – both of whom showed an improvement of 18% in March 2012. The Dodge brand was led in growth by the sporty midsized Dodge Avenger with 9,362 units accounting for an increase of 57% over last March. The Dodge Journey was second in growth with a 44% improvement while the Caravan family was third with a 43% gain over last year. The Caravan lineup was also the top vehicle in terms of sale volume with 13,700 units sold while the full sized Dodge Charger was second with 9,644 muscular sedans sold and the aforementioned Avenger was third in total monthly sales. The only vehicles from Dodge that didn’t show positive growth last month were the Caliber and the Nitro – two vehicles that are out of production and fading their way out of the lineup. Over the next few months, the 2013 Dodge Dart will hit dealerships around the country and we can expect to see a nice increase in sales for the Chrysler Group from that new C-segment sedan.

As for the Ram Truck brand, the Ram pickup moved 26,960 units for an increase of 23% and the Ram C/V sent out 701 new examples of the Ram branded minivan reaching consumers. The midsized truck formerly known as the Dodge Dakota is selling off the last of its new old stock and last month, 82 Dakotas left dealers around the country. The Ram brand recently introduced the 2013 Ram 1500 with a spread of hot new technology combined with more power and versatility to the Chrysler Group could see a spike in truck sales when those new models reach dealers.